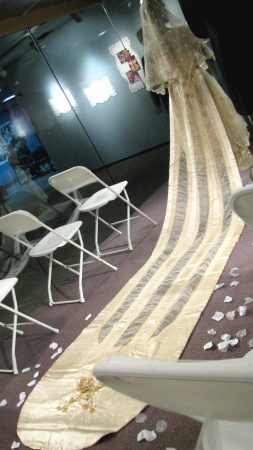 [From the previously mentioned exhibition at the Detroit Historical Museum]

This is the phenomenal train of the phenomenal gown that Delphine Dodge wore at her (first) wedding to Philadelphian banking heir James H.R. Cromwell. It was 1920 and the bride was 21. Mr. Cromwell was 24. The two were married at the Dodge estate in Grosse Pointe.

On the day of her daughter’s wedding, Anna Thomson Dodge wore a five-strand of pearls rumored to have belonged to Catherine the Great. Horace Dodge Sr. bought them from Alfred Cartier, who personally traveled to Detroit to finalize the sale. At the time, the pearls were the most expensive ever purchased — calculated for inflation, they cost about $9.2 million.

Read that again. It’s so egregious I don’t know whether to laugh, scream or faint.

Anna Dodge admitted that she wore them only twice before handing them down to Delphine. 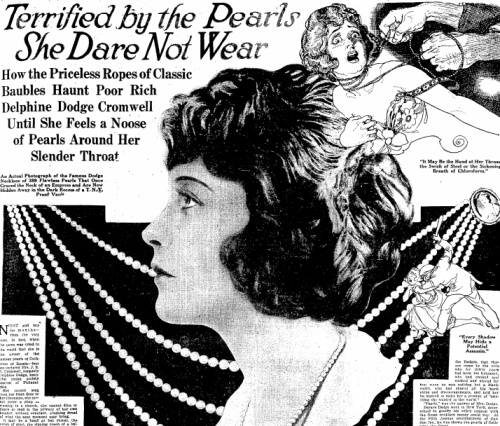 Night and day for months — from the very hour, in fact, when the news was cried to the world that she is the owner of the famous pearls of Catherine of Russia — fear has tortured Mrs. J.H.R. Cromwell, formerly Delphine Dodge, beautiful young society matron of Philadelphia.

She cannot step from her front door to her limousine, she cannot enter a shop or worship in church, she cannot dine or dance or read in the privacy of her boudoir, without constact, crushing dread of what the next moment may bring.

It may be a hand at her throat, the swish of steel, the ripping crash of a bullet, or the sickening breath of chloroform — she cannot tell; she only knows that every shadow may hide a potential assassin, each crack of the stairs may herald the stroke of horror. Her beautiful pearls fairly strangle her with fear if she dares to wear them.

Oh, those dreadful pearls! Really, it seems like the worst part about them would be this kind of terrible (and perversely violent!) tabloid journalism.

Outrageously rich, beautiful debutante Delphine Dodge. Delphine married thrice, died young, and had a yacht named after her. (The S.S. Delphine, by the way, still exists and is available for charter. Her brother Horace Dodge Jr. also gave her name to many of his famous prize-winning hydroplanes.) Time magazine’s archives are full of notices of Delphine’s rumored marriages, rumored divorces, rumored engagements and rumored lawsuits. (Or here’s this gem from a 1937 installment of Life’s “Private Lives” column.) 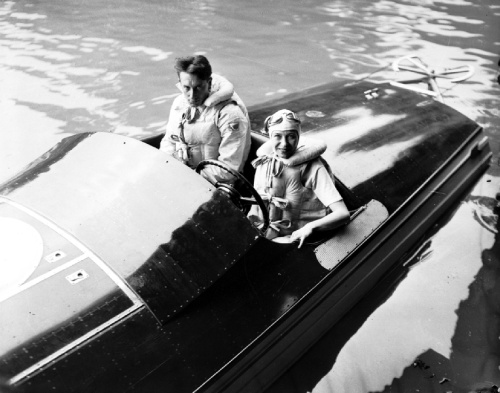 She was also a champion speedboat racer — the first woman ever to compete in the APBA Gold Cup boat race, and the first woman to win the President’s Cup in 1927 (presented to her by Calvin Coolidge).

So there was obviously more to Delphine Dodge than her matrimonial shortcomings. Maybe even more than her ludicrous fortune. But it’s hard not to think about those famous (infamous?) pearls, which sold at auction in 2008 for $600,000.

Okay, we’ll go there: terrible burden or not, the pearls of a fallen empire probably didn’t bode well for the heiress to one of Detroit’s automotive dynasties. Also: if you have $9 million to spare, consider not investing it in baubles of mysterious provenance, whether or not Alfred Cartier shows up to close the deal.

But is it wrong that I have a tender spot in my heart for Delphine Dodge? Is it just her pretty face? Her hard-to-pity unhappiness? Her beautiful wedding dress? The embarrassment of riches? Or something deeper? Admittedly I don’t know that much about her, so if you do, pass it along.