Oh, gosh. We have to talk. About this woman. 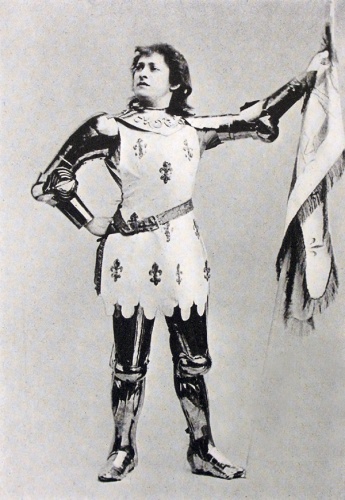 Margaret Mather (nee Finlayson) was born in Canada sometime in 1859 or 1860. Her impoverished family moved to Detroit when she was five; her father John Finlayson may have run a boarding house for sailors.

When she got a little older, Margaret took to the streets to sell newspapers for the Free Press. As a teenager she washed dishes at a fancy hotel, where she watched well-heeled girls her age come and go on the arms of rich, influential men.  As her tragical, romantical Victorian biography goes (who knows if any of this is true!), Ms. Mathers, despairing over her lot in life, tried to throw herself into the Detroit River. But a handsome German stranger rescued her, took her home to her family, and her fortunes forever turned. Someone in New York — a successfully married sister? a sympathetic brother? — sent for her, and off she went with a picnic basket and a dream. Somehow, she found someone to pay for some acting lessons. And that is how this tiny, rough-haired, provincial Scotch-Canadian from the dirty wharves of Detroit came to play one of the most iconic Juliets of the 19th century.

In 1882, Margaret Mather’s manager, J.M. Hill laid plans to mount a lavish new production of Romeo and Juliet in Chicago, with Margaret Mather its debutante star. The production went on a lengthy North American road tour before its debut at the Hill Theatre in New York City in 1885.

Here’s critic William Winter on the production on J.M.’s  Romeo & Juliet, which he chided as being farcically concerned with trappings of polite domesticity:

In the scene of the secret marriage of Romeo and Juliet, two monks, moved, apparently, by springs, suddenly came out of the wall of Friar Lawrence’s cell and placed hassocks for the bride and groom to kneel on … Juliet’s bed-room — the time of her nuptials being the middle of July, in a hot country — was thoughtfully provided with a large fire of brightly blazing logs.

Winters didn’t think Mathers was much good, either:

Miss Mathers showed no comprehension of Juliet’s character or temperament … Her notion of acting was to goad herself into a frenzy, to rage, storm, and “tear a passion to tatters.”

Her elocution was of the sing song variety, and her method of action was mechanical and coarse. When the Friar offered the Potion to her, she snatched the vial from his hand, emitting hysterical shrieks, and after she had swallowed the dose, she collapsed in such a way as to roll down a short flight of steps and land on the stage level. She was essentially a commonplace person fortuitously placed in a prominent public position.

Poor Margaret Mather. A star in her day, but posthumously eviscerated by critics, who tended to echo the sentiment that her acting was mostly frenzied, shrill, and hysterical. 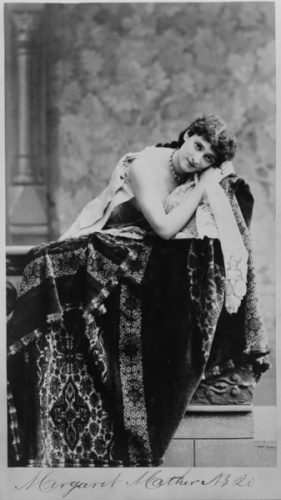 Her private life: predictably tumultuous. She secretly married her manager’s music director. It didn’t work out. She took a second husband, Gustav Pabst (SON OF CAPTAIN FREDERICK PABST!), but they split after he alleged that she tried to horsewhip him. In public! In Milwaukee! Oh, Margaret Mather.

And she died young — after collapsing on stage during a performance of Cymbeline (some said the best role of her career, but no one really cares about Cymbeline, and the production flopped) — possibly of kidney disease. She was 38.

She’s buried at Elmwood. Her funeral there, held on Easter Sunday, was thronged by a celebrity-crazed mob of thousands, who tore flowers and evergreen from the gravesite for souvenirs.

Margaret Mather was buried in a jeweled white gown she’d worn a hundred times on stage, as Juliet.

The Dictionary of Canadian Biography online

A variety of clips from the New York Times