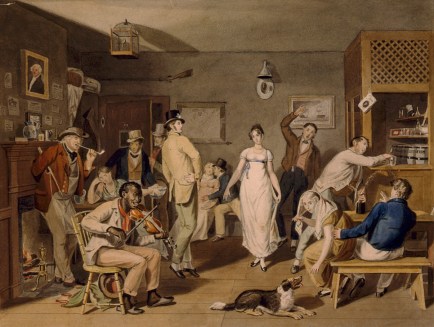 Have any of you that read these lines ever been to a French dance given in a French farm house, not in a tavern? If you have, then you know all about it.

The large kitchen and living room, with its polished floor, quaint old-fashioned furniture, the tall clock in the corner, the huge cast-iron plate stove of two stories, brought in from Montreal in the early days, in which a scorching heat could be engendered in short order. “Music in the corner posted,” which consisted of two violins. And then the gathered company, eager to begin, which they did always early in the afternoon, and kept it up until the small hours in the morning.

… Money-musk, Virginia reel, Hunt-the-grey-fox, French four, the pillow dance and occasionally a cotillion. It did not seem to me as though the feet of the dancers would ever grow weary moving to the inspiring music of “French four,” given on a violin, and as a Frenchman alone could give it.

The General makes note that “refreshments” served in the “primitive style” were ample, then recounts the singular pleasure of walking your best girl home through the snow.