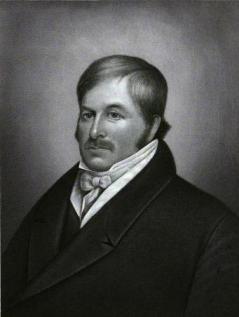 Life for a pioneer lawyer of the Northwest Territory — say, for instance, Solomon Sibley — was no cakewalk.

There were no telephones or telegraph wires. There were no railroads. Communication and transportation were uncertain and often dangerous. Even the brief case, time-hallowed badge of the busy attorney, had not yet been devised …

[On horseback] he traveled, under any condition, from court to court … At night he stopped for shelter in the cabin of some friendly settler. If no such shelter offered, he tethered his horse, built his campfire in a forest clearing, close to the old Indian trail, which was the only path through the wilderness. In that manner, your pioneer lawyer of the West made his uncertain and difficult way.

Solomon Sibley moved to Detroit in 1796 or 1797, not long after the British handed over Fort Detroit to the Americans. A talented and hard-working Counselor, he became one of the frontier city’s most prominent citizens — a member of the first Territorial legislature, Detroit’s first Mayor under the 1806 charter and a justice of the Michigan Supreme Court.

So it sometimes fell to Solomon Sibley to defend the honor of his adopted home.

In later years he made eloquent answer to a contumely issuing from the surveyor-general’s office at Chillicothe to the effect that in the whole of Michigan there was not “one acre in a hundred, if there would be one in a thousand, that would in any case admit of cultivation. It is all swampy and sandy.”

This canard so infuriated Solomon Sibley that in his own orchard he grew a pear that was the astonishment of the agricultural world and the envy of all the natives. It was a pear weighing thirty ounces. This phenomenon was seven and a half inches long and fourteen and a half inches in circumference. The evidence was irrefutable.

On the brink of a brand new year, I have not been able to pluck Solomon Sibley’s magnificent, poetic, 2-pound pear from my imagination.

Perhaps because I suspect that most of us living here have to procure a gigantic pear from time to time. For dubious friends & relatives. For the national media. For people who say, simply, well, what a shame. 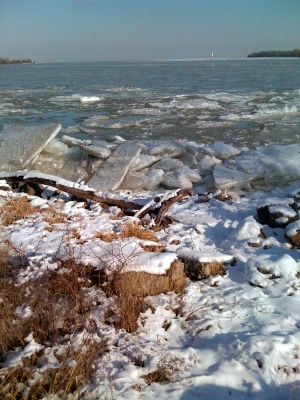 Belle Isle, I think, is one of these marvelous fruits. Last week I took a long walk out on the east end, near the lighthouse, so tucked-away and tiny-looking from the road. For a while I sat on some crooked rocks near the Coast Guard station and watched the ice knock around in the river. There were swans, on-guard and honking. A big green freighter from Cleveland crept down the straits.

Then I went to see the art deco all-marble lighthouse, designed by Albert Kahn. It’s the only one like it in the country. 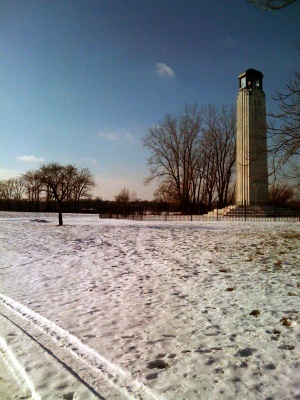 Hiking back across crusty snow hewn to a trail by truck tracks and cross-country skis, I felt like the only person in Detroit. The solitude was profound, but so was this sense of intense affinity. For Solomon Sibley, crossing through a sleeting gale on horseback. For General Friend Palmer, remembering, perhaps in his old age, a sleigh ride on a frozen pond, or a horse cart struggling through snowy downtown streets. For a French woman farmer, trekking out on some winter errand. For families burning wood they’d split themselves to stay warm.

I started this blog more than a year ago. Let’s not go back that far in the archives, OK?  Because in 2010, this project really started in earnest. In fact, in January 2010 alone, I visited Elmwood for the first time, discovered Silas Farmer, learned about Stevens T. Mason and the quest for Michigan statehood and … drumroll? … began to enjoy regular visits with General Friend Palmer. (I still don’t know where “The Burning of the Steamer Great Western” is, though.)

And I’m just so grateful for it. Every minute of it. And all of you reading. Writing about Detroit — a Motor City before the motor that I never knew existed — has given me a pride, a passion and a thrill I never expected.

So here’s my magnificent pear. I’m offering it to you. It’s the log cabin in Palmer Park. It’s the joyously, defiantly beautiful cemeteries, full of boarded-up mausoleums and cryptic Masonic symbols. It’s the boy governor. The boisterous marble fountain built by a gambler bachelor king. The meandering 1000-page memoir of the history-lover General and the unsurpassed, encyclopedic survey of the unwavering Christian mapmaker. It’s the blog. It’s you. It’s the city, and everything about it that takes your breath away.

It’s going to be a big, ridiculous, anxious, wonderful year. I’m getting married in April — on Belle Isle. And — it’s official! — I’m writing a book. About Detroit. I can’t tell you too much more about it because even I don’t know what it’s going to be like.

That’s a lesson I’ve learned, here. You can lay your plans, but history will upturn them, almost as soon as you pick up your trowel.