My intended came home from some resale shopping with a present for me: a copy of Frank Angelo’s 1974 picture book Yesterday’s Detroit. 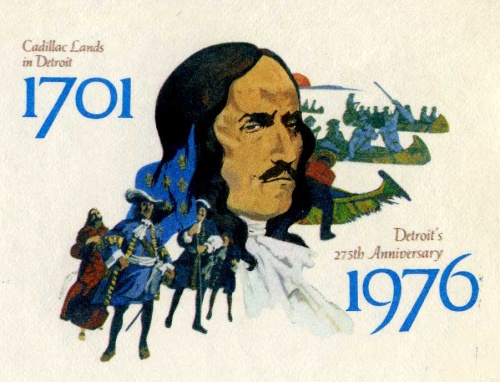 It came with a bonus 275th ANNIVERSARY BOOKMARK! With a super-70s thug mug of Antoine de la Mothe, Sieur de Cadillac, and a smaller detail of him flaring his royal blue fleur-de-lis cape. And a montage of his squad of Canadian voyageurs in canoes. And is that Father Constantine del Halle in the Franciscan’s robes to his left?

I just adore this. Here’s the back: 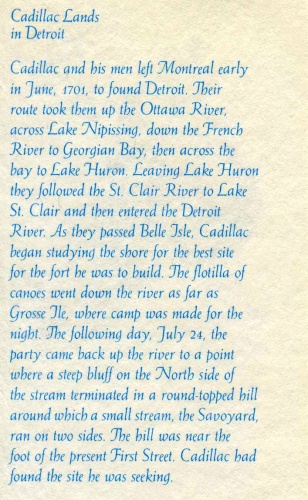 Cadillac and his men left Montreal early in June, 1701, to found Detroit. Their route took them up the Ottawa River, across Lake Nipissing, down the French River to Georgian Bay, then across the bay to Lake Huron. Leaving Lake Huron they followed the St. Clair River to Lake St. Clair and then entered the Detroit River. As they passed Belle Isle, Cadillac began studying the shore for the best site for the fort he was to build. The flotilla of canoes went down the river as far as Grosse Ile, where camp was made for the night. The following day, July 24, the party came back up the river to a point where a steep bluff on the North side of the stream terminated in a round-topped hill around which a small stream, the Savoyard, ran on two sides. The hill was near the foot of the present First Street. Cadillac had found the site he was seeking.

It felt right to find this when we did, as I associate the Cadillac narrative — with its friendly Natives, overtones of nation-building and the “survival miracle” theme — as well as the earthy yet so over-the-top ’70s color palette with Thanksgiving.