The great harpsichord caper of 1799

OR: Get this harpsichord out of my face.

There was a harpsichord in the settlement some years prior to the opening of the new century. Just when this musical instrument was brought to Detroit is uncertain, but it was there long before the year 1799, for at that date it was represented to be in a dilapidated condition.* 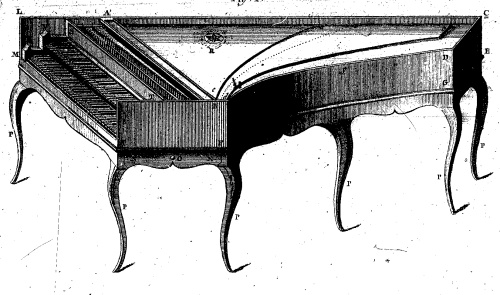 The instrument belonged to Dr. William Harffy, a British surgeon who decamped to Canada when Americans assumed control of the fort in 1796. He took his grungy old harpsichord with him — a decision he came to regret.

“Curse the music. I wish it was sold. I care not for what … You will favor me if it could be in any ways disposed of,” wrote Dr. Harffy in a letter dated October 17, 1799.

But he couldn’t sell it. It was a wreck! So when a friend of his, Commodore Alexander Grant, sailed from Grosse Pointe to Ontario for a visit,  Dr. Harffy decided to play a devious prank.

He snuck the harpsichord on the boat. It sailed back to Michigan with the Commodore.

He came to regret this decision, too.

It was fun while it lasted.

The harpsichord was removed to a village storehouse and never heard from again.

*Clarence M. Burton, from “Amusements in Early Detroit,” an address he gave in 1909 at the annual dinner of the Society of Colonial Wars and included in When Detroit Was Young, a volume of his essays published in 1933.