Finally! By gracious invitation of Preservation Wayne! We went on a real tour. With a tour guide. And it was rich. 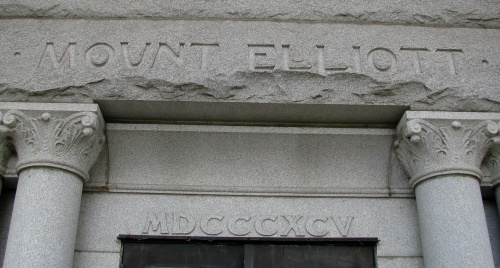 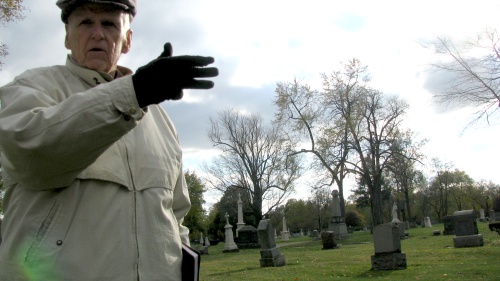 For two and half hours in chilly weather, Cemetery Director Russell Burns and former Director Peter Buchanan (both learned and valiant gentlemen) introduced us to early French and Irish settlers, founding Detroit families, architects, industrial leaders, religious leaders, one Mayor (the honorable Jerome Cavanagh), and soldiers that fought in, among other incursions, the American Revolution, the War of 1812, for and against Napoleon in the Battle of Waterloo, and the Polar Bear Expedition to Arkhangelsk, Russia after World War I. 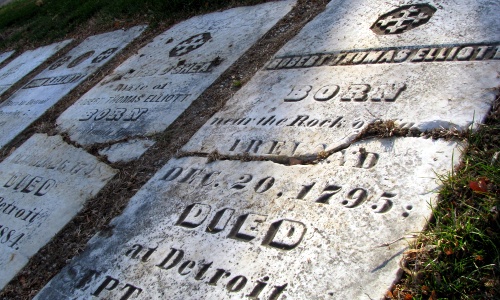 Mt. Elliott is named for one of its founders, Judge Robert Thomas Elliott. Born in Ireland in 1795, he came to Quebec in 1819 and began a career as an architect. He came to Detroit in 1834.

Robert Elliott was one of the original purchasers and planners of Mt. Elliott Cemetery, which was to be the cemetery of Trinity Catholic Church (one of the first English-speaking Catholic congregation in the West). The sale was completed in August of 1841; Robert Elliott died a month later after a construction accident at St. Mary’s Church. He was the first internment at Mt. Elliott. 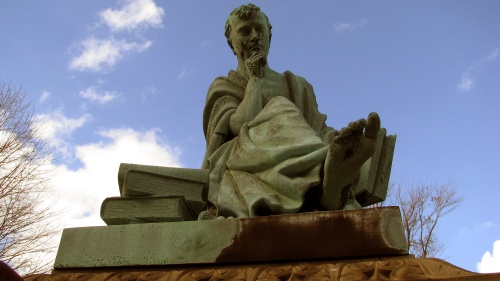 When you enter through the gatehouse, this monument of a barefoot scholar is straight ahead. It graces the grave of Daniel Campau, son of the famous Joseph Campau. Daniel was a member of Detroit’s first Board of Education, which explains the piles of books. 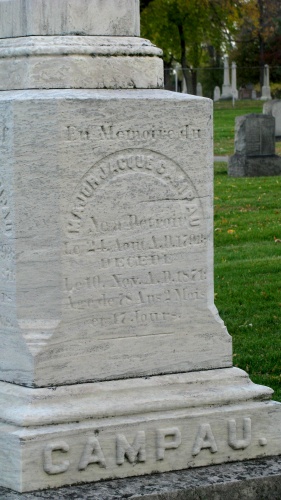 Major Jacques Campau served as a First Lieutenant in the War of 1812 and was present at both William Hull’s humiliating surrender of Fort Detroit and the decisive American victory at Thames, where Tecumseh was killed.

Where’s the famous Jos. Campau? We knew he was at rest at Elmwood, but Russell explained why: Gabriel Richard had him excommunicated for a laundry list of offenses to Catholic behavior, including usury, selling whiskey to the Indians, joining the Masonic order and (gasp!) convincing his nephew to run against Father Richard for a seat in the Territorial Congress. Guess who won?

Another family you might know best from their eponymous street: the Beaubiens. 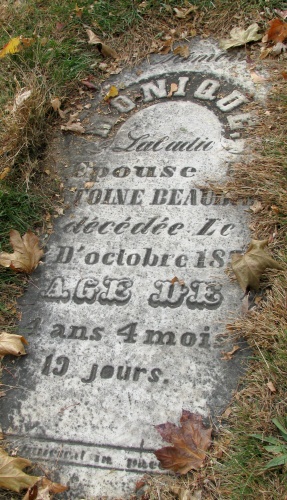 Monique’s husband Antoine was flush with cash, but he didn’t really like speaking English and was kind of a do-nothing. So Monique, a teacher and an apparently competent and generous business mind, managed the estate, donating land to charitable projects including St. Mary’s Church, St. Mary’s Hospital and the Academy of the Girls of the Sacred Heart. My favorite part of this story: After Monique died, Antoine married a young French woman and went broke. 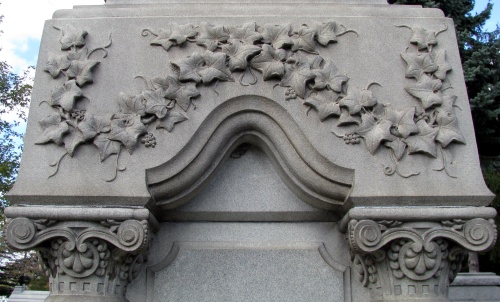 Putting this post together is like reliving how much there is to see at Mt. Elliott across so many disparate eras of city history and, at least when it’s cold outside and the sun is sinking, in so little time. How to choose who to get acquainted with? 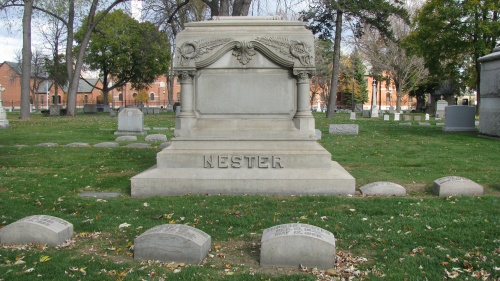 This is the monument of the Nester family. Thomas Nester was a lumber baron. His grandson, also Thomas Nester, was a hospital orderly during World War I who made a very personal and grisly contribution to the vaccination for trench fever. 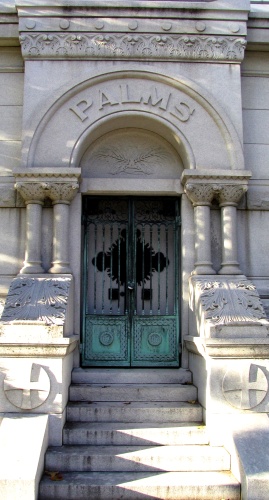 Nearby lie the Palms, a Detroit high society family if there ever was one. Ange Palms was a Belgian quartermaster in Napoleon’s army and his son, Francis Palms, came to Detroit in 1833. (Ange and several other family members decamped to New Orleans, and the family continues its legacy there and here.) Francis amassed a fortune through real estate (mostly the brokerage of lumber land in northern Michigan and Wisconsin as well as the mineral-laden Upper Peninsula). Francises II and III are buried here as well.

So is Charles Louis Palms, who at 30 years old became the youngest bank president in America. Wrote Clarence Burton, Charles Louis was “one of the best known of the younger Detroiters, a man of marked popularity … of innate culture and of quiet and modest demeanor, he is at all times dignified yet thoroughly approachable.”

(The Palms also left a significant architectural legacy in Detroit that includes the Palms Apartments, the Palms House and the Palms Theatre, which is now the Fillmore.) 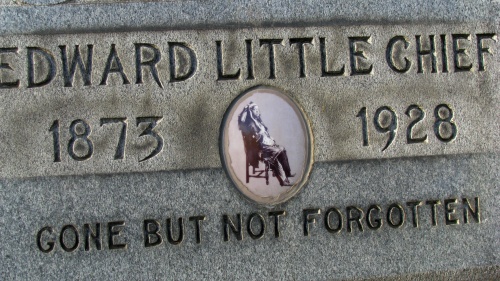 And what about the Brennans? Oh, the Brennans. This is one of the best stories about a rough night out I’ve ever heard, and I like to think I know a thing or two about rough nights out.

Luckily, YouTube exists, because Peter tells this story better than I ever could. Please watch it; it involves P.T. Barnum, Niagara Falls, and zoo animals.

Honestly, Russell and his colleagues have done so much research that, at this point, I’m just going to recommend you direct your curiosity to his massive PDF of notable burials, from which I have cribbed heavily for this post.

Since it lies beside Elmwood, which is so expansive, I have often thought of it as the “small” cemetery. But it contains multitudes.

So rest assured, dear friends, that we will be back to Mt. Elliott soon, whether physically (still largely contingent on whether or not I get myself a good pair of winter boots) or in the digital space.