Fort Wayne, Detroit’s star-shaped riverfront Fort, has never been a battleground. Still, it has plenty to recommend it to prospective haunters, from the old limestone barracks building to the empty field where the hospital used to be to its Spanish jail, Indian mounds, and dark old sally ports. 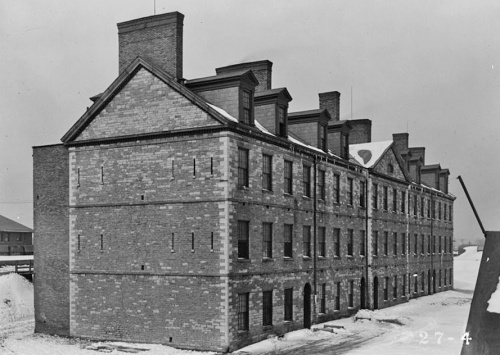 But the creepiest spot in the whole place?

“It sounds kind of funny to say it,” says Wayne (his real name) Miracle (also his real name), whose company, Metro Paranormal, has been doing paranormal investigations and tours of Fort Wayne for two years.

It’s a bathroom at the Visitors Center.

“I’ve had two different women tell me they were going to step into the women’s restroom, but they saw legs in the stall,” he says. “And when they got tired of waiting and walked in anyway, no one was there.”

Miracle has also seen lights turn on and off and shadows passing in that bathroom when the building was locked up and empty for the night. At first his team didn’t even think to bother investigating the Visitors Center, but it’s proved a fruitful hunting ground over the years. (The Visitors Center building was built in 1903 as a recreational facility for soldiers.)

Throughout the Fort, Miracle, Metro Paranormal investigators and participants on his tours have heard phantom voices, footsteps, and the hum and chatter of ghostly conversation. Apparitions are said to appear on the breastworks around 1:20 in the morning. Miracle has seen doors open and close themselves, and spirits have chased historical reenactors out of the old jail.

“We’ve investigated a lot of places over the years, but Fort Wayne is one of the most active places we’ve ever been,” he says.

The Haunted Fort Wayne tour combines an orientation and a tour of the grounds, starting around 8 p.m., with free investigation until 4 a.m. Year after year, every tour sells out.

Miracle says the tours introduce people who might never have known about Fort Wayne otherwise to the important Detroit landmark.

“The Fort is in peril,” he says. “I know you don’t want people thinking of this place as just a haunted attraction, but we do what we can to spread the word. We ask everyone who comes on the tour, whether they have a good time or a bad time, to tell everyone about Fort Wayne, and let people know it exists.”

You can read reports of Metro Paranormal’s Fort Wayne investigations, review their evidence and make up your own mind at MetroParanormal.org.

More information about Fort Wayne us available at historicfortwaynecoalition.com.

And if you’re still sitting on your favorite haunted Detroit story, it’s not too late! Get in touch before Friday, yo.