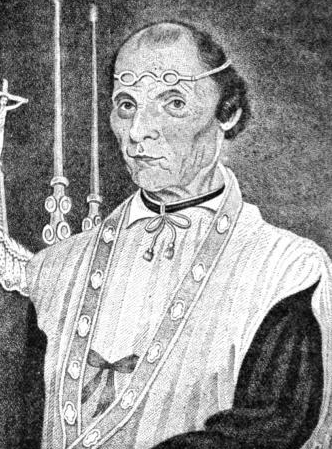 Gabriel Richard was born on October 15, 1767 in La Ville des Saintes, France. Thirty-one years later, Father Richard — who had emigrated to Baltimore in 1792, then came to the Northwest Territory as a missionary — found himself in the city on the straits.

“Seventeen hundred and ninety-eight was really a red letter year,” writes Harriet Marsh in A History of Detroit for Young People, “because it brought to Detroit a wonderful man, Father Gabriel Richard, who came to take charge of the parish at Ste. Anne.”

Father Richard may be one of Detroit’s all-time most adored citizens. (I have read that Detroiters threw a huge birthday party for him as late as the 1930s.) Detroit was still a backwater frontier town when Richard arrived. When he died — a victim of the cholera epidemic of 1832 — he had founded Detroit’s first schools and its first printed newspaper; he’d shipped in its first printing press and hauled in its first organ on horseback. At the first public meeting of the Northwest territorial council in 1824, Father Richard opened the session with a prayer that “the legislators may make laws for the people, and not for themselves.”

Detroit’s founding Father cut a funny figure in town: be-robed and be-spectacled with a thick French accent, a sword scar on his face, a mighty intellect and a gentle demeanor. During the Great Fire of 1805, Richard recruited a heroic relief effort:

As usual, Father Gabriel Richard came to the rescue. He walked down the road to some of the farmhouses and soon had a group of French farmers in their canoes and bateaux going along the shore and asking for food for the fire sufferers. As soon as the canoes returned, a meal was cooked, and some of the men rigged up temporary shelters, using the fallen posts of the stockade. (Marsh, A History of Detroit for Young People)

And then, of course, Father Richard penned the fire-inspired motto that still lifts the hearts of long-suffering Detroiters: Speramus meliora; resurget cinerbus. We hope for better things; It shall rise from the ashes.

Legend even has it that when Father Richard was captured during the War of 1812, Tecumseh — the tribal confederacy leader who was fighting against America with the British — ordered his forces to stop cooperating until Richard’s release was secured.

Attendance at Father Richard’s funeral exceeded the population of Detroit. General Friend Palmer was in attendance. In his memoirs he wrote:

It was said that Father Richard was so studious and patient in his search after knowledge that he actually counted the eggs in a whitefish. How many millions, history fails to tell.

It is probably OK that the mystery of the whitefish eggs is lost to history. Father Gabriel Richard’s legacy is singular nonetheless.

Father Richard is entombed in Ste. Anne’s. We wish him a happy 243rd.