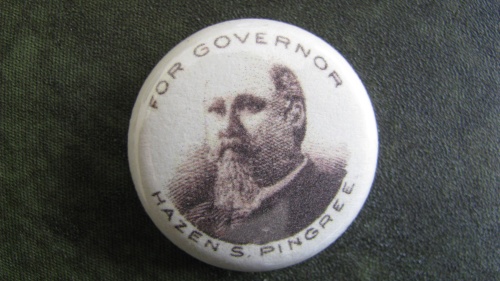 (You can get this and other vintage reproduction campaign buttons at the always marvelous City Bird.)

So much to say about Hazen Stuart Pingree, the Idol of the People, and one of Detroit’s most famous and beloved mayors. You probably know the basics of his legacy:

Hazen was elected Governor in 1896 and had originally planned to hold his Mayorship and the Governor’s chair concurrently, that feisty so-and-so. But the State Supreme Court wouldn’t have it, so it was off with Ping to Lansing, where the adored Mayor found himself a struggling and obstructed Governor.

His final address after his second term is full of vinegar and vitriol. His indomitable spark leaps right off the page, but for a man so successful for most of his career, his frustration at this final stretch is kind of heart-yanking. It reminds me of some of our Presidents who really did not like being President or consider their Presidencies the high point of their professional lives. (Thomas Jefferson, anyone?)

Here’s how the speech begins:

I enlisted as a private at the commencement of the civil war and have two honorable discharges, which I prize. I have been a citizen and taxpayer of Detroit since 1865. My ancestors fought for their country in both the Revolution and the war of 1812. I mention these facts to show that there is nothing in my record to indicate that I should not be treated with proper respect as an individual.

The office which I have held for the last four years should have commanded the respect of every loyal citizen in the State, whatever the opinion of myself may have been. That it did not command the respect of the people of Lansing is proved by the fact that during the whole four years of my term as Governor I have only once been invited to the home of a single resident of the capital city of Michigan.

Awww. No one wanted to have Hazen over for dinner. That hurts!

The speech goes on to enumerate all of the reforms he attempted as Governor, with great expositions on tax equity for big corporations (famously, the railroads), direct election of Senators and protection of Michigan forests. But at every corner, he blames the obstruction of the Supreme Court and the Legislature (particularly the “Immortal Nineteen” in the Senate, his sworn enemies) for failing to make bigger, better reforms. On the subject of the Senate’s failure to ratify a  Constitutional amendment that had overwhelmingly passed by popular vote, for instance, he said:

The Senate, however, as it has always done in the past, defeated the bill without assigning any reason for its action. This action of the Senate is too idiotic and boyish to discuss.

By the end of his address, Hazen is jaded and sharp-tongued as to how he may have been more successful in the Governor’s office:

My experience during my political life, extending over a period of twelve years, has convinced me that in order to secure the full commendation of those who consider themselves the “better classes,” the Governor and other high officials must do nothing to antagonize the great corporations and the wealthy people. I am satisfied that I could have had the praise and support of our “best citizens” and our “best society,” and of the press of the State generally, if I had upheld those who have for years attempted to control legislation in their own interests, to the end that they might be relieved from sharing equally with the poor and lowly the burden of taxation. I would have been pronounced a good fellow and a great statesman.

Of course, Hazen Pingree was, and still is, considered a great statesman. But I think what makes him resonant with today’s Detroiters is not just his humane progressivism or the fact that, you know, we are totally into urban vegetable gardens right now.

Hazen Pingree did not suffer morons, hypocrites, evil people, cowards, or systemic dysfunction. He was a bully when he had to be and he could be rude. But he got. shit. done.

And the sweep of cynicism at the end of his career feels very contemporary to me.

Also bitter. Because he died a year later, in London. After an African safari. But long may he live, still idolized by the people of Detroit.