Oh hi, it’s me again, forgetting my camera all over the place and bringing you magical iPhone fauxlaroids of my detours through Detroit history. 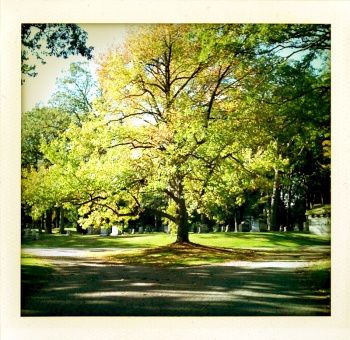 Friday afternoon was a good afternoon for a bike ride to Woodlawn. Sunny and crisp and the perfect little waltz out of a stressful week. In lieu of writing your face off today, I just wanted to share a couple nice things I noticed on my lazy pedal through the fall-tinted grounds.

For instance: Look how pretty these are. 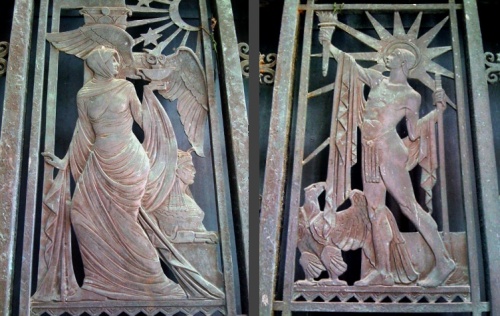 Athena and Apollo, right? I love the owl.

This stylish deco pair appears on the door of Hugo Scherer’s mausoleum. Hugo Scherer’s life is a classic tale of immigration, industry and ingenuity; how does that old story go? Boy graduates from University, goes to work in Dad’s apothecary, takes over the business, expands it, adds on a carriage goods department just for the heck of it, and before you know it he’s a major stockholder in the Detroit Motor Car Supply Company, way early in the automotive game. Success! (Here’s the whole vibrantly detailed story of H. Scherer & Co.) 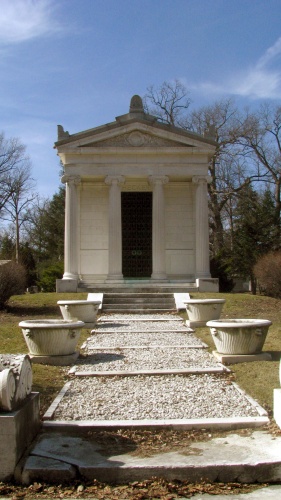 We visited Colonel Frank Hecker on our last trip to Woodlawn, but subsequent to this visit, we learned (from the Arcadia Press book on Woodlawn by A. Dale Northup) that Stanford White designed his kingly crypt, which is the only one in the cemetery made from marble rather than granite.

Stanford White? He was the architect who was shot in the face by comely actress Evelyn Nesbit’s jealous husband, leading to 1906’s “Trial of the Century,” which you’ll remember if you’ve ever seen the musical/watched the movie Chicago. Oh, that Stanford White. Yep.

The highlight of the afternoon (really, the whole day) was spying a lanky red fox cross the road, saunter over to J.L. Hudson’s mausoleum and sit itself down on the steps to watch geese from the cover of some shaggy pines. We kept our distance so as not to spook, and also we didn’t have our camera (AGH!) so this mess of pixels is the best evidence we can present to you:

And then we saw this lady. She looked a little familiar. 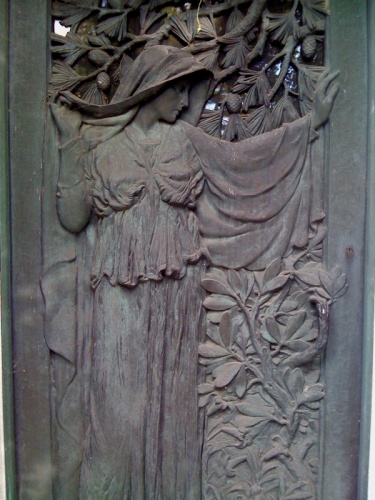 Oh, it’s because we’ve seen her before! At the door of Frederick J. Fisher’s mausoleum at Holy Sepulchre Cemetery in Southfield. She must have been a popular usher into the afterlife. This one belongs to Charles Bohn, of Bohn Aluminum and Castings. Fisher died in 1941, Bohn in 1953. The brass relief sculpture was designed by Robert J. Hill, creative director of Gorham Brass, and sculpted by Ben Johnson. I still think it is really something, even though I now know it to be less than an original.

And no visit to Woodlawn would be complete with saying your respects to the Governor. 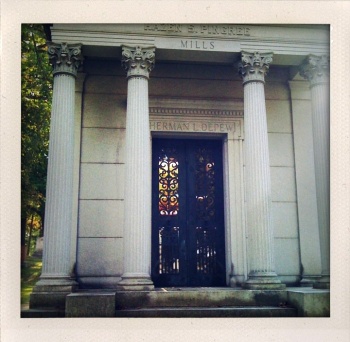 More on Hazen S. Pingree, Idol of the People, later this week, if all goes to plan. And more cemetery bike rides before the weather turns!