This is going to take some exposition, so I hope you can bear with me. It starts like this: when I was born, my mom lived in Garden City, Michigan. 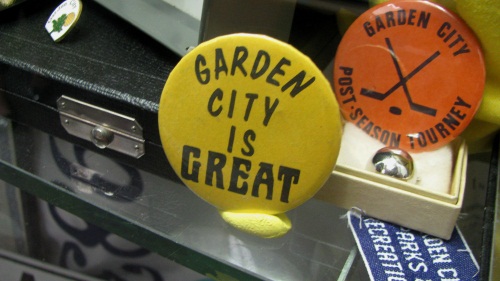 My mom was born in Detroit, but she grew up in Garden City, and after she graduated from college, she got a job with the Garden City Police Department. So she moved back to Garden City. To this day, my mom has her hair done in Garden City by a man she’s known since he was a toddler. Her dentist was a high school theater rival. Even though we moved out when I was very little, I went back to Garden City all the time, mostly to get my hair cut, my teeth cleaned, and to visit relatives.

Garden City appeared briefly in the nonfiction honors thesis I wrote about my family (hold your groans). I think I said something about how in the post-War years, Garden City was a place where the Ford Motor Company promised its employees an acre of land for a garden. It turns out that my research was shoddy and I was confusing a few different eras of Garden City history. I guess I didn’t really do any research, but that’s why they call it creative writing, right? 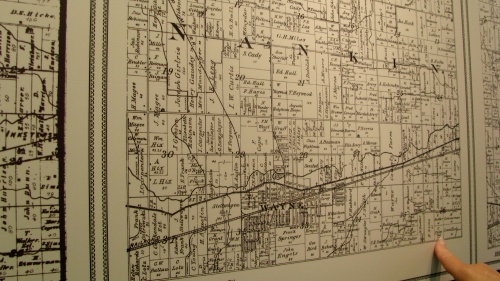 After that, I didn’t think much about Garden City until this blog came to life. And then, of course, I couldn’t stop thinking about the Garden City I never thought about.

So my gracious mother, who had endlessly driven up and down Garden City’s blocks when she was on patrol, agreed to take me on a little tour. We started at the Garden City Historical Museum, which is housed in the Straight Farm House on Merriman Road. 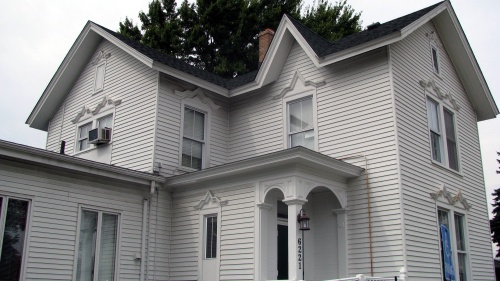 As it turns out, the story of Garden City shares the narrative thread of many of Detroit’s suburbs: in the 1820s, settlers from the east starting wandering out here in search of better/cheaper land, investment opportunities or just a change of scenery.  Then they stuck around. Proximity to Detroit turned out to be pretty helpful. Then came cars. And then World War II, and then the idea of the suburbs as a city-centric entity. The “garden city” concept that gave Garden City its name was a late-19th century British urban planning movement that has its own Wikipedia page. It is hilarious that I thought  it was Ford’s idea. RESEARCH!

Early settlers came with land deeds signed by Andrew Jackson. They include the Reverend Marcus Swift: 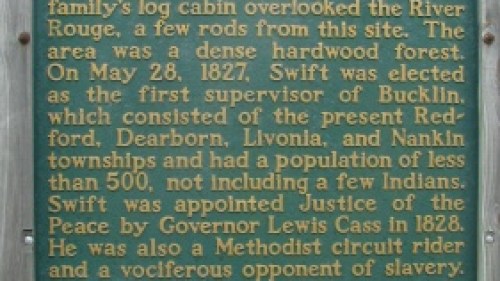 Marcus Swift, a traveling Methodist preacher and agitating abolitionist, lived in a hardwood forest near the mighty River Rouge a century before Henry Ford ever had his eye on Garden City.

Anyway. The Garden City Historical Museum is a treasure box of quirky historical joys, from the township’s settler days to the very recent past (sighted: high school yearbooks from the ’90s) — and their curious intersections: 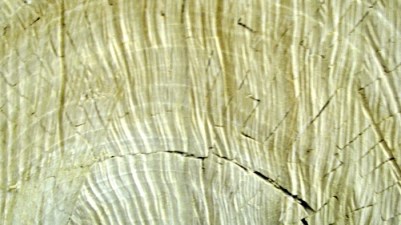 Like this 300-odd-year-old Elm tree, a slab of which is just relaxedly leaning against a wall at the Museum, that was cut down to make room for the generations-old Santieu funeral home, which has buried many of my family’s loved ones. The Santieus still print their own prayer cards — in-house. 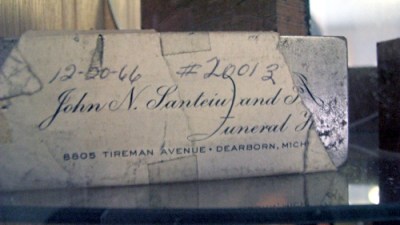 We found some relics from my mom’s high school: 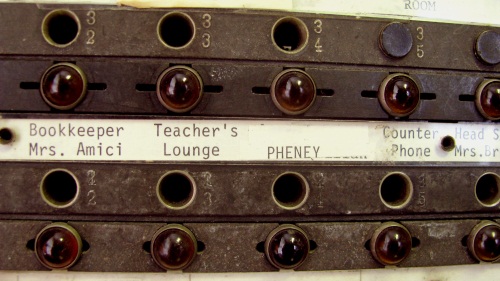 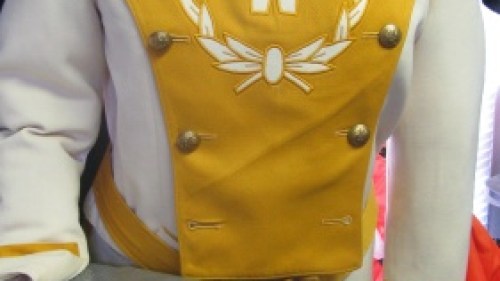 And, in a tiny room that housed military and fire defense memorabilia, on a tiny shelf of police department knick-knacks, we found a framed photo of my mom’s colleague Lisa with a caption that read: Garden City’s First Female Police Officer.

My mom turned to our sweet docent and said: “Actually, that was me.”

Lisa and my mom had been sworn in on the same day; Mom got out of the training academy first.

Our docent, after promising to talk to the curator about correcting the record, grabbed a binder out of a closet and asked if she wouldn’t mind taking a look at the G.C.P.D. archives. 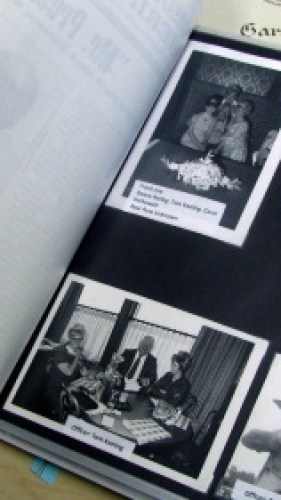 It was really something amazing to spend an afternoon there with her — so much richer than it would have been to see it alone. That quizzical collection of artifacts — a wedding dress from the 1880s, some antique typewriters and adding machines, a room cluttered with children’s toys from the turn of the 20th century to the near-present day — is amusing. 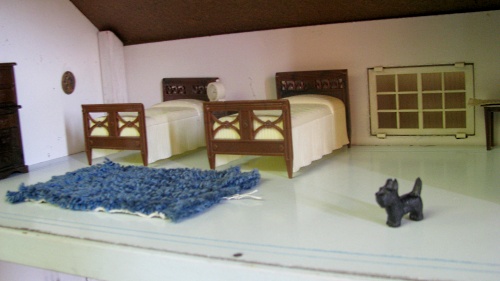 But it was great to see the Garden City Historical Museum function as more of a historical community center, a place to look yourself up in a binder of newspaper clips, see the switchboard that used to be in your high school’s front office, or read up on the history of your dentist’s practice. (Yes, there is some exhibit space dedicated to our family’s dentist.) When my mom pulled from its binder sleeve a typewritten “Guide to Starting a Neighborhood Watch” with a photocopy of her badge on the cover, she said, “I wonder if I wrote this?”

My whole sense of what belongs in museums, who tells the stories of our communities, and where time goes pretty much fell in on itself.

I just loved it. I wonder if there will be a place like this for me to visit in 30 years.

After we left the Museum, we went on a short driving tour. We found Henry Ford’s Honeymoon Cottage, nestled adorably behind the world’s first K-Mart. 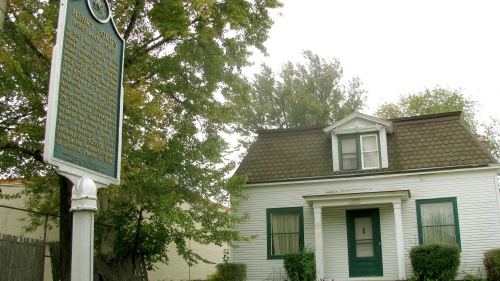 HOW CUTE IS THIS HOUSE? Don’t you want to LIVE IN IT? Someone actually does! How does one become the person who lives in Henry Ford’s Honeymoon House? I would love to know.

Ford built this house himself after his wedding in 1888. It used to be in Dearborn, but the Ford company bought the land it was on and its owner had it moved to Garden City.

For whatever reason. Maybe just because it is such a surprising place.

(Oh, and have I mentioned my mom? And how she’s amazing? 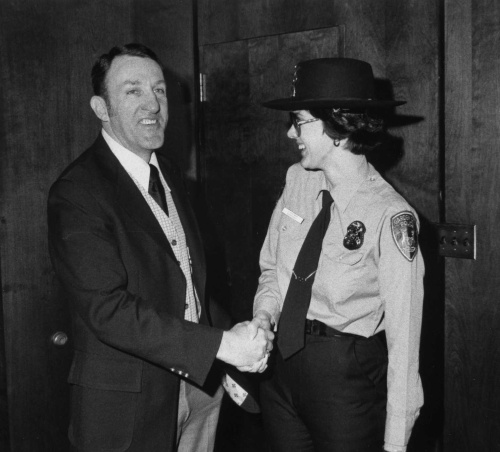 All daughters should be so lucky.)