People keep asking (OK, mostly just my dad) why I don’t do a nice story about the old Detroit beers. Goebel. Pfeiffer. And of course, Stroh’s.

It’s the summer of Stroh’s. We’ve been drinking a lot of it. I’ve been wondering, given my love for another German immigrant whose flagship beer is now an American blue-collar classic, if there might not be something to love in the biography of Bernhard Stroh and his family.

And you know, there probably is. But I haven’t found out yet.

Here’s what I did find out: 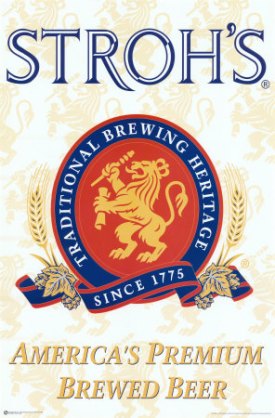 The lion on the Stroh’s label comes from Bernhard Stroh’s first American brewery, which he called the Lion Brewing Company. Back in Kirn, Germany, the Stroh family began brewing beer at their inn during the 18th century (hence “Since 1775” on the label). Bernhard Stroh (so the story goes) saw lions everywhere; they were part of Kirn’s municipal crest:

So when Bernhard built his glamorous new brewery palace on Gratiot Avenue between Hastings and Rivard, he commissioned the up-and-coming sculptor Julius Theodore Melchers, also a German immigrant, to carve two 12-foot tall crouching lions to sit atop the building and keep watch.

Julius Melcher is famous for two things: his cigar-shop wooden Indian sculptures, like this one:

And his four sculptures of Detroit’s founding Frenchmen that once adorned Detroit’s Old City Hall. Now they’re on the Wayne State campus: 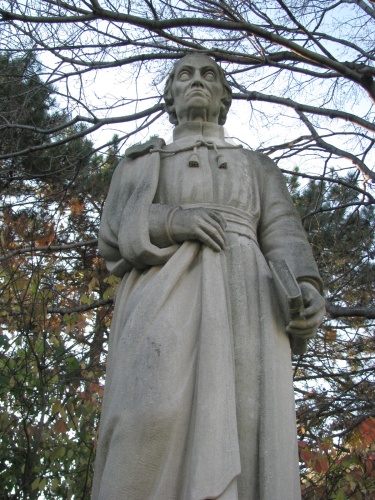 Moral of the story: Beer and art belong together. I wonder if those lions still exist somewhere.

In less trivial news, you’ve probably heard about the huge fire at the abandoned Eastown Theatre — and the emergency demolition notice posted in its wake. For more on Eastown we defer, as always, to Detroit’s hard-working champion of all things buildings, Dan Austin, of BuildingsofDetroit.com:

The Eastown opened in a largely residential area on Harper Avenue near Van Dyke at 6:30 p.m. Oct. 1, 1931, with the movie “Sporting Blood,” starring Clark Gable. Advertisements in newspapers at the time declared the theater’s opening as the “dawn of a new entertainment era” and invited Detroiters to “thrill to the glory of Detroit’s newest, finest Palace of Happiness.’” The ads also proclaimed the theater’s opening as “the most glorious event in the history of east Detroit.” Business owners and merchants in the neighborhood pitched in by decorating the surrounding streets for the grand opening.

… The building was constructed between 1926 and 1930 and featured a 6-foot-high lit dome in the auditorium with a gold-gilded ceiling. The lobby featured imported marble with a wide, elegant marble stairway flowing into the mezzanine. Like those theaters downtown, the Eastown featured office space and stores, but it also had 35 apartments. In addition, it had the grand Eastown Ballroom, with large arched windows, a band shell and an oak dance floor. Up to 300 people could dine there on fine linen and elegant china or attend weddings and banquets.

Read up on the whole history of the Eastown here, including its riotous days as a drug-addled rough-and-tumble rock palace. It’s excerpted from Dan’s book Lost Detroit: Stories Behind the Motor City’s Majestic Ruins, which hits shelves at an independent local bookstore near you on August 30. (Or just pre-order it now.) Sweetly and sadly, the Eastown graces its cover: 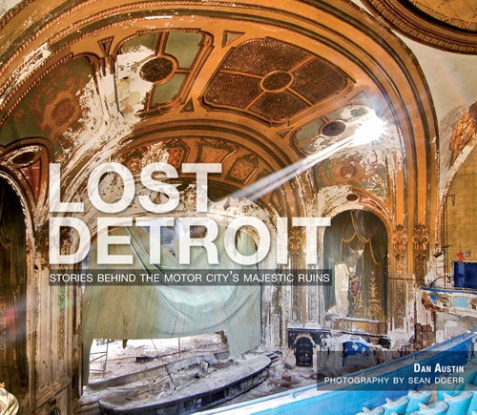 You can see the post-blaze devastation of the Eastown in this video from detroitfunk.com:

Detroit. Don’t let your babies grow up to be abandoned buildings.