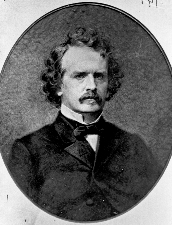 I love this guy. Mostly just his hair, but his bowtie is nice too. Oh, and also, his fiery and righteous indignation in re: slavery and the legacy of liberty left to all Americans by the framers of our founding documents.

Handsome Devil Kinsley Scott Bingham was born in New York in 1808. In 1833, his family moved to Michigan, where Kinsley started a law practice — pretty routine for soon-to-be politicians of the day. Head West, sit for the bar, open up shop. And that’s what Kinsley did. He held local offices in Livingston County (Postmaster! Justice of the Peace!) and was elected to the Michigan House of Representatives in 1837, as a Democrat.

Fast forward to July 6, 1854. Thousands of anti-slavery activists convene in Jackson, Michigan to mobilize opposition to slavery in the territories and the repeal of the Missouri Compromise. The convention hall couldn’t accommodate the huge crowd of people, so the assembly was moved to a nearby oak grove.

Then, after some patriotic fanfare from the Jackson Brass Band, there was some good, old-fashioned speech-makin’.

Misfortunes make strange bedfellows. I see before me Whigs, Democrats, and Free Soilers, all mingling together to rebuke a great National wrong. I was born a Whig. I have always lived a Whig, and I hope to die fighting for some of the good Whig doctrines. But I do not stand here as a Whig. I have laid aside party to rebuke treachery. In 1849, McClelland, Stuart, and Bingham stumped the State advocating the doctrine of the Wilmot Proviso and pledging their lives, property, and sacred honor in the maintenance of those doctrines, but not one of our representatives has ever been honest enough to carry them out, except Kinsley S. Bingham.

This speech is transcribed in William Stocking’s Under the Oaks: Commemorating the Fiftieth Anniversary of the Founding of the Republican Party. Stocking writes of Chandler’s speech:

This reference to Mr. Bingham was received with thunders of applause, followed by three rousing cheers. It was taken as an indication that Mr. Chandler, one of the strongest of Whigs, was willing to support for Governor Mr. Bingham, an old Democrat and only recently training in Free Soil ranks.

By the way, please enjoy how awesome this cover of Under the Oaks is: 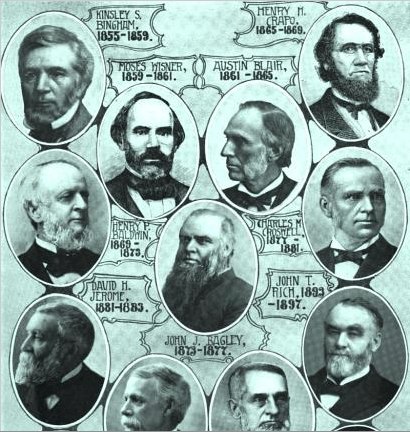 How many Michigan Republicans can YOU spot? Bonus points for finding the Detroiters!

Anyway. Lots of people consider that day in Jackson the true birthday of the Republican party. Others make a case for the schoolhouse in Ripon, Wisconsin, where an informal county convention was held in March 1854. (My years as a resident of the Badger State led me to believe the latter, but this story sweeps me away so much that I’m ready to switch sides. I have no party. Like Zachariah Chandler, I just want to believe what’s right.)

Kinsley Bingham was elected Governor of Michigan that fall — making him one of the country’s very first Republican Governors. As Governor, he established the Agricultural College of the State of Michigan (which would later become — you know it — Michigan State University), a move that earned him the nickname “The Farmer-Governor.”

Kinsley Bingham’s Governorship ushered in nearly 25 years of Michigan Republican Governors, many of whom were also organizers or attendees of the oak grove convention.

After his second term, in 1859, voters sent Kinsley to Washington to serve in the Senate. In 1860, he campaigned for your friend and mine, Abraham Lincoln.

(We’re celebrating gubernatorial season with occasional profiles of intriguing Michigan governors. We already talked about William Woodbridge. We haven’t decided who we want to spend time with next, so if you have a favorite, let me know.)