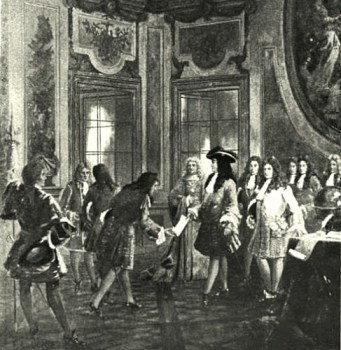 On July 23, 1701 — 48 days after leaving Montreal and nearly five months after Louis XIV granted Cadillac the power to establish a fort and a town at Detroit (depicted here, 1902 painting by Fernand LeQuesne) — Antoine De La Mothe, Sieur de Cadillac came ashore, with 50 French soldiers and 50 French-Canadian voyageurs. The next day, he declared the settlement founded for the advancement of the glory of France.

Soon the great canoes were unloaded. Camp was struck in the woods on the bluff. The axes of 50 woodsmen rang through the forest stillness and the crash of falling trees scattered the wild animals.

So Detroit, City of Destiny, was born.

It was, wrote Clarence Burton, “a houseless city of a hundred souls.”

I know I said I was planning something really fun for today, and I’ll admit sheepishly, I had some big, fanciful plans crammed in between my big, stressful deadlines this week — plans that OF COURSE I couldn’t turn around, since they involved a flash mob at the Cadillac statue in Hart Plaza, some kind of parade, French-Canadian voyageur songs, my accordion, baguettes, culottes, rough-looking men in fur trader costumes, a ceremonial cannon shot across the straits, vintage Cadillac cars, and of course a grand entrance by wooden canoes. Followed by drinks. Anywhere.

This didn’t work out. For obvious reasons.  I was going to settle for a meet-up at the statue, a dramatic reading of Cadillac’s letter to France and maybe a processional to the bar, to the tune of some old coureurs de bois tunes. That didn’t work out either. Because I didn’t plan it. DAMMIT.

Anyway, a year from now, Detroit turns 310, and I hope that some of you will help me plan something grand to celebrate. If you are a rough-looking man, we’ll start looking for a fur trader costume for you. If you own a canoe, I will put you on the canoe-bringing list. If you know any coureurs de bois songs, we should hold a workshop.

And for God’s sake, if the French government can make William Cotter Maybury a chevalier, they can make anyone a chevalier. Here’s hoping that Detroit gets a new ceremonial chevalier every July 24 from now on.

This amazed me when I read it yesterday in The Historical Geography of Detroit, by Almon Ernest Parkins (1918). It’s something I sort of understood, but never as well as I do now:

Detroit was 53 years old when the British began their fort at Pittsburg … It was 95 years old when Moses Cleveland laid out the city that bears his name on Lake Erie. Detroit celebrated its centenary in the year that the Holland Land Company plotted the city of Buffalo at the mouth of Buffalo Creek. The first log cabin in Indianapolis was not erected until 118 years after the French began the city on the Straits. And Detroit had been making history 129 years when the Illinois Board of Land Commissioners surveyed the site of Chicago, the great metropolis of the interior.

“I am a warrior, not a writer,” Cadillac apparently said once. But he wrote anyway, and unless his translators have embellished his language over the past three centuries (entirely possible), he wrote well. I’ve shared this before, but it seems the proper occasion to share this, almost ritually, once more:

Its borders are so many vast prairies, and the freshness of the beautiful waters keeps the banks always green. The prairies are bordered by long and broad rows of fruit trees which have never felt the careful hand of the vigilant gardner. Here, also, orchards, young and old, soften and bend their branches, under the weight and quantity of their fruit, towards the mother earth, which has produced them. It is in this land, so fertile, that the ambitious vine, which has never wept under the knife of the vine-dresser, builds a thick roof with its large leaves and heavy clusters, weighing down the top of the tree which receives it, and often stifling it with its embrace.

… If the situation is agreeable, it is none the less important because it opens and closes the door of passage to the most distant nations which are situated upon the borders of the vast seas of sweet water. None but the enemies of truth could be enemies to this establishment so necessary to increase the glory of the king.

I thought about Cadillac today when I was driving home through Southfield.  Baby, look at you now.

Vive le Chevalier. Bon anniversare, le Detroit. I wish I could speak French to tell you how much I love you.