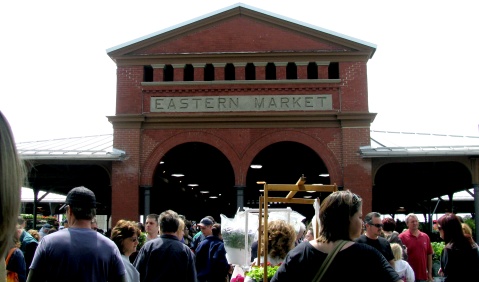 If you’re headed to Eastern Market this Saturday, here’s some trivia for you to consider while you’re shopping for delicious local produce: the Market, one of the oldest in the country, was formerly the site the Russell Street Cemetery, one of two city-owned cemeteries of the mid-19th century.

Situated on land that the city bought from some farmers, Russell Street Cemetery welcomed its first permanent tenant in 1834. The city was growing — and cholera was killing people in droves — and a smaller municipal cemetery, Clinton Park at Gratiot and Clinton Street, was getting cramped.

Within 30 years, though, Russell Street had become a little too cozy as well, and it was falling into disrepair.

Wrote General Henry Morrow to the City Council in 1861 (from Burton):

It is little short of disgraceful to Detroit that its cemetery should have been allowed to fall into the ruinous and dilapidated state in which we find it at present. It was once the place of interment for the whole city and in it are deposited the remains of many worthy and respectable people. When the city sold lots in the cemetery, it was with the implied pledge that the grounds should be and remain sacred for cemetery purposes. This pledge has been entirely overlooked or disregarded. Not only has the ground been neglected and the fences allowed to go to ruin, but a portion of the land has been appropriated for other purposes. The city has the power, without doubt, to prohibit further interments in the city cemetery, and it would be its duty to do this if the public health or convenience required such a step. But it is still used for the almost sacred purposes of burial, and yet all care of it is neglected.

The City Sexton, Peter Cleisen, appealed to the Common Council in 1857:

I respectfully represent to your honorable body, that certain persons are in habit of coming to the city cemetery and digging up bodies for the purpose of removal. Whether they have proper authority so to do I do not know.

The cemetery is under my charge and it seems to me proper that bodies should not be dug up except under my direction.

In 1869, burials stopped at Russell Street. Things were really a mess, and what’s more, the land was starting to look too good to waste on the dead. People were already selling hay and wood at market nearby, and Gratiot Avenue was the perfect conduit between the city and the country.

In 1879, a Circuit Court ordered the cemetery vacated.  From 1880 to 1882, more than 4500 remains were disinterred and relocated to Elmwood, Woodmere and a cemetery in Grosse Pointe.

And guess who stopped by during the excavation?

Rambling about the city a few days ago, I found myself in the City cemetery on Russell Street (corner of Gratiot Avenue) and it occurred to me that as the order had gone forth for the removal of the bodies still remaining buried there, I might idle away an hour or so scanning the few remaining tombstones, and that perhaps I might remember something in relation to them that would be of interest to the living.

… Many of our old residents will remember Captain Burtis. His grave is so near Russell Street that the passerby could read his name on the tombstone; doubtless many have done so, when it stood erect, and perhaps have wondered who this person was that once owned the high sounding title of Captain. Quite recently, some miserable vandal broke the stone in twain. The captain had the gift of forcible language to a remarkable degree, and I can imagine him standing beside his own grave, in the flesh, giving vent to his feelings against the perpetrators of the useless act in some of his choicest English. He died in 1836 at the age of 45, so the stone records, and though comparatively young, he had lived long enough to accomplish some few things to help along the growth of this great city and state.

No wonder the General and I get along so well.

James Witherell, Supreme Judge of the Michigan Territory was also buried at Russell Street. Witherell used to own the land that became Palmer Park and Woods; he deeded it to his grandson, Thomas Witherell Palmer, who was General Friend Palmer’s cousin. James Witherell is now rests at Elmwood.