Wouldn’t it be terrific to know how this book … 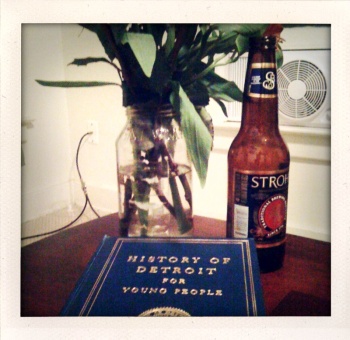 … ended up at Powell’s Books in Portland, OR? Quite a journey for a children’s book self-published in 1935.

However it fulfilled its own Manifest Destiny, it’s back where it belongs now, thanks to a very nice man in my life who was out of town on a business trip for several days and returned home with this book (!!!) as a souvenir.

You know how I feel about this book, right? Of course you do.

Tonight I set out for a bike ride at dusk (maybe inspired by reports from the USSF group ride this afternoon).

(Bike aside: I ride a vintage Ernie Clements Falcon that I bought for $10 at a Goodwill in Beloit, Wisconsin.  This bike was built under a bad sign. Days after I bought it, after a long ride through mint fields, my front wheel collapsed, hurling me to the street. I had it shopped at least four times after that until finally, in Milwaukee, I brought it to a friend who ran a punk bike collective for a total rebuild. He was evicted from his warehouse a week later and my bicycle, in pieces, mouldered in his boarded-up work room. He broke in to save it and then left on a six-month train-hopping vision quest across the country. I finally retrieved it from him, still in pieces, days before I moved back to Michigan, where I shipped it off to another secret bike laboratory so it could at least meet the glory it so badly deserved. It’s been fully restored and I’ve never ridden a better bike. It’s amazing that I haven’t given up on this bike. I actually don’t even know why I was so bent — and so lavish with cash — on saving it.)

Didn’t make it more than two miles before my back wheel made a hideous kerchunk. Everything stopped. The wheel had buckled. All that was left for me was to wait in the 7-11 parking lot for my ride to come get me, then get home and nose around for something to blog about. 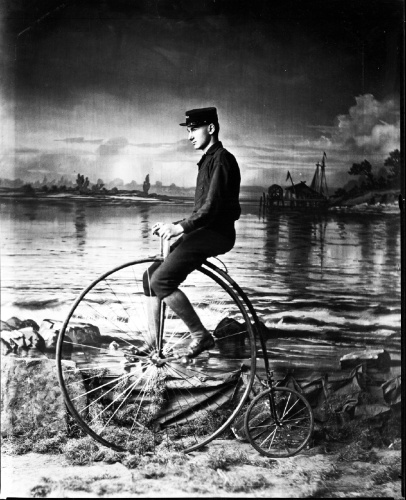 This is Norman Conger. He was with the National Weather Service. Here he is in 1880 on top of his High Ordinary.

During the [18] seventies the bicycle was a low-built contraption with the pedals on the front wheel and was sometimes called a “Bone-shaker.” This was followed in the eighties by the “Ordinary,” with one high wheel and one small one in the rear. A short stepladder or horse block was used for mounting, and the driver was above the heads of foot passengers and rode at great peril. With the improved wheel, the number of cyclists increased rapidly. Gay parties were now seen on [Belle Isle] where wheels could be rented.

Marsh is quick to clarify that the bicycle craze in Detroit didn’t really blow up until the 1890s, lest you think that “the old-time feeling for fast horses and racing on the ice had gone.” Oh, no.

Bikes in Detroit were a big deal, as I’m sure many readers know far better and more thoroughly than I do. The bicycle’s popularity in Detroit, as I’ve gathered from a few reliable accounts, contributed directly to the development of the car. Henry Ford’s first functional automobile, the Quadricycle, was basically a bicycle with four wheels and an engine. The Dodge brothers started in bicycles. William Metzger, who opened one of the first automobile dealerships in the country, was a bicycle enthusiast and entrepreneur first. His bicycle shop, Huber & Metzger, opened in 1891. Metzger was also a founding member of the Detroit Wheelmen, a prominent cycling club that P.N. Jacobsen wrote about in Outing that same year:

Wheeling has attaineda height of popularity in Detroit heretofore unknown.The vilest of cedar block pavement in the last stages of decay on the principal streets until recently retarded that natural growth in wheeling interest that almost all American cities experienced during the last few years.
… Although this general improvement in the city pavement has been a great factor in the wonderful increase in cycling, there is another which has been equally potent in this respect, and that is the existence of a large and active wheel club.
A year has scarcely passed since this club, active in cycling as well as socially, was formed, yet it is now in a position to properly entertain visiting wheelmen, and when visiting other cities to have a representation creditable to a city of such importance as Detroit. The formation of the club resulted in a concentration of all cycling interests in the city into one large vigorous organization under the name of the “Detroit Wheelmen.”

The Club, Jacobsen wrote, was one of the largest the nationwide League, and its membership was growing rapidly. That year the Wheelmen organized a 300-mile ride to Niagara Falls.

The frenzy for cycling in Detroit reached fever-grade in the last decade of the 19th century. Again from History of Detroit for Young People:

The city streets were crowded with men, women, and children on wheels … High school boys prided themselves on century runs to Port Huron and back on the Saturday holidays. As you may imagine pedaling a hundred miles gave a boy a strenuous day. Cass Avenue was so crowded with wheels after dark that the street twinkled with the tiny headlights and the air was filled with the clanging of bicycle bells. Foot passengers waited in vain for a chance to cross the road.

(I know this is a coincidence, but this was during the Pingree years. Golden. Age.)

Bike fever coincided with vast improvement to the city’s streets, which were being paved and mended like never before. The Detroit News writes that many historians “attribute the automobile’s explosive growth in Detroit to the network of superior roads built for bicyclists.”

Part of me wonders if this is just dumb luck: the automobile — which the bike, in some way, made way for — widened, flattened, smoothed over, and made necessary, Detroit’s thousands of spidery thoroughfares. Now we don’t need so many of them and we can safely bike our hearts out.

But don’t you want to believe that it was bikes that made those roads possible in the first place? And now we’re just taking back what’s rightfully ours?