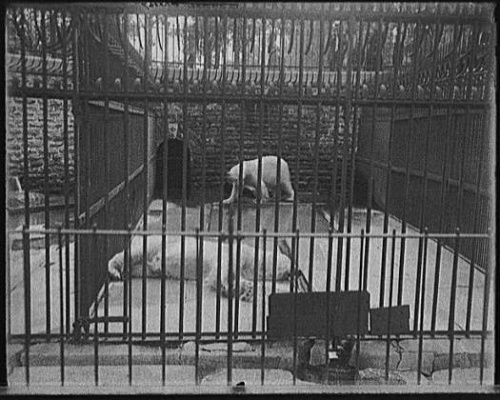 This week we have a little trove of quirky, adorable, mayhem-documenting newspaper stories for you, all about the Belle Isle Zoo. The Belle Isle Zoo opened in 1895 with a few deer and a bear.

And then! (Okay, we’re distilling here.) In 1940, just a year before control of the Belle Isle Zoo was ceded to the Detroit Zoological Society, something terrible happened.

Another Clawed by Belle Isle Bear

When Paul Langelle, 35 years old, climbed over the low railing around the black bears’ den Friday afternoon at the Belle Isle Zoo, in order to feed one of the bears peanuts, he apparently forgot that the bears sometimes grab for both fingers and peanuts.

The bear reached with his paw for the peanuts and so doing scratched the index finger of Langelle’s right hand.

It was the third time this summer that visitors at the Belle Isle Zoo have been mauled or scratched by the bears because they refused to stay outside the safety railing.

Paul Langelle was treated with antitoxin and we assume he recovered fully from the scratch on his hand.

When the Detroit Zoo opened in Royal Oak in 1928, it was one of the first modern zoos to landscape “natural habitats” for its animal inhabitants, rather than enclose them in cages. It allowed the animals to roam more freely, and although it seemed like nothing was separating the visitor from the majestic and dangerous creatures, it actually kept them at a greater distance and prevented the reaching-through-the-bars-to-feed-them-peanuts phenomenon that inevitably caused problems. Because people are idiots. So the Zoological Society did the animals and human kind a favor with that move. Right?

I’ll be sharing a few more stories like this throughout the week, with thanks to Dan of Buildings of Detroit for passing them along to me. May you venture over to his website and read his rigorous journalism fondly and frequently.  Oh, and he has a book coming out this summer, and we’re pretty much losing it with excitement.