On writing, about history and otherwise 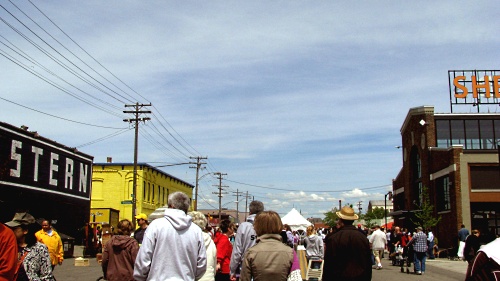 Last weekend I hosted my first out-of-town guest. She was a good sport, and highly amenable to being dragged around on whatever journeys we felt would be edifying. With Detroit, even when you’re showing it off to the dear people in your life who are smart and perceptive and fair and not creeps, the pressure is on to get it right. I don’t want anyone going home to Milwaukee wondering why I left, or telling all of our friends that love it as I may, I live in an awful place. 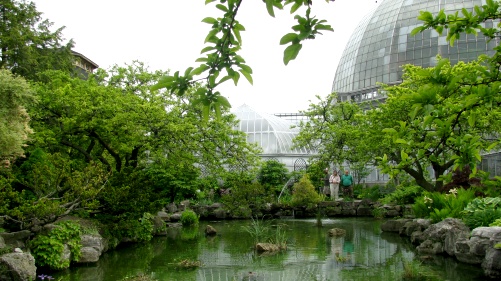 I think we did the best we could with the time we had: a greatest hits tour that started with Grand Circus Park and a loop on the People Mover, then on to Campus Martius, the Guardian Building, Belle Isle & the Conservatory, Jim Scott and his Folly, Flower Day at Eastern Market, anteaters at the Zoo that wrestled like puppies, and lots of time in between for eating and drinking and hanging around. We drove by the Garland Stove, all locked up behind the indefinitely shackled State Fairground gates. We introduced her to Hazen S. Pingree, William Cotter Maybury, the good people of City Bird and Cass Café. I narrated everything kind of  shakily, blurring details and scrambling chronologies and not answering questions very well in my great excitement to share it all. 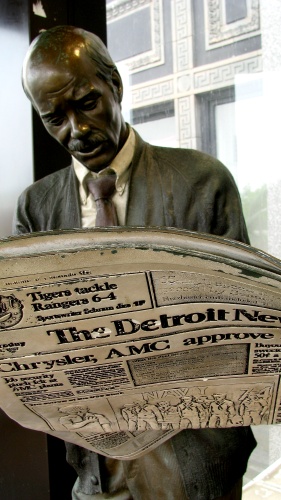 Lately it’s been hard to let my mind settle on one topic of interest for a nice, slow, productive stretch. Every night that goes by without attention paid to Detroit history brings anxiety, doubt, and a party of excuses: too much noise on the input channel, too many hours at my day job, too many glasses of wine when my day job is over, way too much fret expended on this wedding I’m having which, while nowhere near go-day (we haven’t even scheduled go-day), is starting to take on some promising shape.

All week after my friend left, I tried to write about anything, anything, we saw together. Eastern Market? It’s really old — in the 1880s, Silas Farmer was getting nostalgic about the way it “used to be”:

The glory of the ancient market-days has departed. The black-eyed, olive-skinned maidens, in short petticoats, from the Canada shore, no longer bring “garden-sauce and greens,” the French ponies amble not over our paved streets, and little brown-bodied carts no longer throng the marketplace. In the brave days of old, every one went to market, and most persons to the City Hall Market. Marketing and visiting were combined. In the market the rich and poor met together; it was common ground, and the poorest were sure of a “good morning” from the richest in town.

What about Belle Isle? Ile de Cochons? Where the French let their wild hogs loose to get rid of all the rattlesnakes? The island that, in 1769,  Lt. George McDougall, with permission from George III, bought from Ottowa and Chippewa Indians for “five barrels of rum, three rolls of tobacco, three pounds of vermilion, and a belt of wampum, an additional three barrels of rum and three pounds of paint to be delivered when possession was taken”? The place where an appraisal from 1780 reported “3 dwelling houses, A fowl house, Some lumber, and 1 old barn without a top”?

The fiancé thought there might be a good story in how the anteaters got to the Zoo. 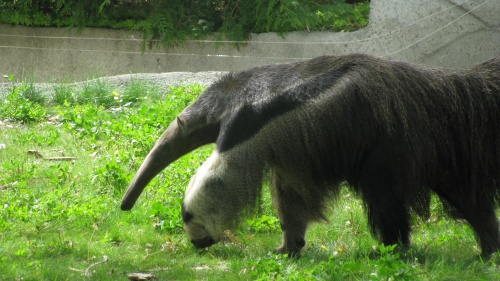 I’d lay in bed for long stretches, surrounded by big fat history books, idly paging through them, waiting for something electrical to surge in me. I’d get frantic: there just seemed to be so much to talk about, so much to learn about, so much I know nothing about, and so many connections to zip together.

In the end it was Silas Farmer that helped me push through this boring block, not with an account of “Uncle Ben” Woodworth and his Steamboat Hotel or reports of the municipal animal pounds that became important when the growing city got too crowded with loose livestock. It was his gentle and encouraging introduction to the book, which discusses his approach to writing about history, that shook me to action. A few excerpts:

In view of the strange and interesting incidents connected with the history of Detroit, and the fact that it epitomizes the history of half the continent, and furnishes much information that is duplicated in the annals of no other city, it seems strange indeed that no one has heretofore attempted a comprehensive view of our fair domain. Undoubtedly there are those who could have woven a finer web, but none could be more earnest or enthusiastic … I have studied Cadillac’s own writings, handled tomahawks and scalping-knives stained with the blood of a century ago, read original letters written by Gladwin and Clark and, bending over the moldering dust of Hamtramck, “the friend of Washington,” have received inspiration for my task.

… As Columbus, when he saw branches of trees and seaweed drifting from the west, was led by the law of induction to infer the existence of America, so a true historian, by the presence of certain facts, foreknows the existence of others, and, like Columbus, he is ready to sail upon every sea in search of what is known but undiscovered, and as he searches for one truth, innumerable others come like reefs and islands into view.

… If to be a reliable historian, one must be always cool, and calm, and unimpassioned, as some would have us believe, then I must acknowledge that I was unfitted for my task. It seems to me, however, that even in local history, the historian should be full of both the fervor and the flavor of the times he would describe.

I think anyone who throws him or herself to work on something they love can relate to the real ardor that Silas Farmer brought to his colossal (and is it fair to say unmatched?) project, A History of Detroit and Wayne County and Early Michigan (which you can read in full, online). And when it’s tough and confusing and hard to pull it all together, it’s nice to be reminded that the work is its own reward.

A final reminder from the book’s dedication (to Senator Thomas W. Palmer):

During the progress of this work many friends have greatly aided me in many ways; one of them, like myself a native of the city, not only assissted me in the manner of others, but also gave me special encouragement, saying, oftener doubtless than he remembers: “Don’t let yourself be hurried; take time to do it well.”