General Friend Palmer and The First State Election in Detroit

Have you visited dia.org since they revamped their website? I wouldn’t normally ask, but browsing their collection is a lot easier and more fun to explore. You can zoom around artworks with little magnifiying glass tool! I like it. You should check it out, if you’re into that sort of thing.

Here’s what brings this up:

A while ago I wrote about my (so far fruitless) search for a Thomas Mickell Burnham painting of the burning steamboat Great Western. Burnham, you might remember, is responsible for this painting of the Michigan’s first state election, held in Detroit in 1837. It’s on exhibit in the DIA’s American Art galleries, and as a document of city history, it’s pretty fantastic.

You might also have read a short post I wrote about Michigan Gardens, the wild and wide-eyed entertainment complex created by Colonel David McKinstry, with its bathhouse, menagerie, museum of curiosities and visiting circus.

So I just learned that General Friend Palmer (you know I love him) was a Gardens patron:

The museum … contained many rare and curious objects, among which were three Egyptian mummies, a fine collection of wax figures, also a variety of beautiful and rare specimens of birds, beasts, minerals, shells, etc; with many interesting curiosities in nature and art. There were many splendid cosmoramic views, and in the evening phantasmagora and phantascopal illusions were exhibited. The museum was quite popular and a source of considerable revenue to the colonel.

Dramatic exhibitions of a light vaudeville character were given in the fourth story, and laughing gas was also administered to those who desired it. This giving of laughing gas was somewhat dangerous to the operator and to spectators as well. A partition extending from the floor to ceiling hemmed in the partaker of the gas from outsiders. Many funny incidents occurred connected with this pastime. While under its influence, the partaker usually acted out his peculiarities or proclivities, laughing boisterously, dancing, boxing with an imaginary foe, declaiming, etc. It was quite a feature and always attracted a large crowd.

Well, of course it did.

[He] was indeed a man of  many parts, enterprising, public spirited and somewhat of a Bohemian. He was tall and heavily built, rather abrupt in manner and speech, yet of a warm, genial disposition which made him quite popular. He was fond of parade and show, was either a major or colonel in the militia —anyway, everyone used to call him colonel.

… His success in most every venture led someone to call him “Silver Heels,” a name that stuck to him through life. A fair representation of the colonel is given in the picture painted by Thomas Burnham entitled “Election Day at the Old City Hall,” when Stevens T. Mason ran for governor against C. C. Trowbridge.

Ready to meet Col. David McKinstry? Here he is:

I guess the General witnessed this first state Election Day first-hand; he would have been seventeen.  He shares the words of another writer on the occasion of Michigan’s first gubernatorial contest:

The season had been wet and Woodward and Jefferson Avenues were about half a leg deep in mud porridge. Yet a grand Democratic procession was organized to pass through it. Mr. Stilson was the grand marshal. He rode a horse which was completely covered with a cloth of gold, and he himself was decorated with all the glories of a Grand Legion of Honor. And the way he rode at the head of the column was like Mars on the Captoline Jupiter. A small schooner, fully rigged and manned, and mounted on wheels, and drawn by six or eight horses, was an important feature in the line. And there Democracy marched to the music of the Union.

Here’s Mr. James Stilson, a prominent auctioneer (and according to the General, dog breeder, and megalomaniac), leading the procession: 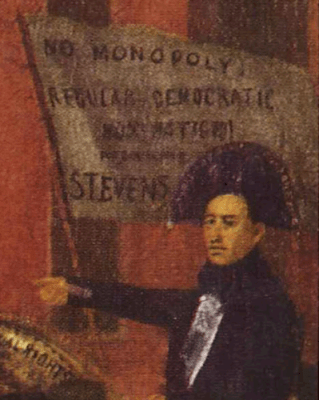 IF ONLY MICHIGAN GUBERNATORIAL ELECTIONS WERE STILL THIS EXCITING!

Many millions of thanks to the DIA for obligingly sending me the key to all of the people and buildings in this painting, although head-smackingly, if I had read an extra couple of chapters ahead in Palmer’s book, I would have found all of the information right there. It happens.

Speaking of Stevens T. Mason, how’s the Capitol Park project progressing? Anyone know? Are Mr. Mason’s bones reinterred yet? I want to spend some time with the Stripling.