So. I have become a little single-minded about Jim Scott, whose magnificent fountain on Belle Isle was cause for tremendous contention when it was built. 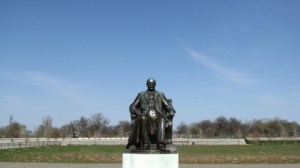 On an excursion to the Burton last week, I dug up a charming profile of “Detroit’s Boss Romancer” from the March 14, 1885 edition of the Detroit Tribune. Like many newspaper stories of the day, it doesn’t seem to have much of a point besides to give the reader some amusing information about somebody they may or may not know, but Scott’s joke about the dead man in the saloon made me laugh out loud at the microfiche machine, causing alarm amongst the librarians. Maybe you’ve heard it?

One of [Scott’s] stories is about a two men who sat up with the body of a dead man who had died near a saloon. Every few minutes during the night the watchers had adjourned to the gin mill for something to drink. At last their money gave out and they were refused credit. They then carried the late respected into the bar and stood him up against it.

“Our friend wants drinks here,” said one of the men. Three drinks were handed out. Two were drank, and when the barkeeper wasn’t looking, the drink for the unconscious man was swallowed by one of the friends. Then the watchers went out and pepped through a window awaiting results. Pretty soon the bartender asked the remaining man for pay for the drinks. as he received no answer, he asked again, and then again. Suddenly he grabbed a bung-starter and struck the quiet man to the floor.

“Ah ha!” shouted the watchers rushing in and picked up their dead friend. “You’ve killed him.”

“Well, supposin’ I did? He drawed a knife on me first.”

More amusing facts from the Trib story that made me smile include his fondness for a particular style of neckwear:

… He never wants to wear any other necktie but a white bow. He probably does this because he has a sort of solid, professional look, and likes to appear like a member of the bar.

As well as his great love for bagpipes:

Jim is passionately fond of music on an Irish bagpipe and says the only time he feels romantic is when he can sit down in a small room and have some fellow with a pair of lungs like an emigrant’s valise play “The Devil’s Dream” on the bagpipes.

The article, however, is quick to temper Scott’s cleverness with a brief coda that he may, in fact, be insufferable:

He never tells the same story twice, and does not depend on traveling men for his stock of stories, but invents them himself. He tells lots of funny things in different dialects … There is one friend of Jim’s, however, who insists that he dishes up old chestnuts, and when this friend sees the joker coming, he runs and hides in the hay-mow.

One person who was NOT running for the hay-mow, who in fact confirmed Scott’s skill at funny voices was — YOU GUESSED IT! — General Friend Palmer, who wrote of his good friend Jim in Early Days that “on the order of dialect story telling … he is unapproachable.”

I don’t think a statue of this guy was such a bad idea. In fact, I really love it. There. I said it.