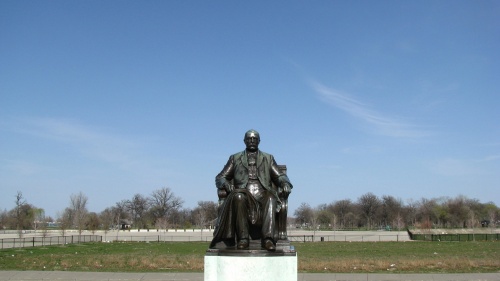 Poor James Scott. Was he really so repugnant a creature as Detroit society painted him in the years after his death and before the construction of his grand fountain on Belle Isle?

The heir to a real estate fortune didn’t do much to earn himself a monument quite this enduring, and the condition he placed on building one of the country’s greatest marble fountains with almost the entirety of his estate — that it come with a life-sized commemorative  statue of himself — reeks of either pathological self-importance or a deliriously smug joke.

I just found this article from the January 29, 1911 issue of The New York Times on the end of the fight over Scott’s contentious fountain. Wait, it made national news? Oh, it did. The article begins:

This is the story of a man who led a practically blameless life for eighty years, according to the preponderance of testimony, as blameless as that of the average man at least, who loved his home, his family, his friends, and his city, the latter so much that when he died he left five-sixths of a fortune of $600,000 to the municipality of Detroit with which to build a fountain on Belle Isle, and who has been since his death, a year ago, unmercifully reviled for his generosity. James Scott was his name — “Jim” he was universally called.

Sure, the article goes on to admit. There was that “hog block” incident, where Scott hung a giant gilded pig statue near some grocers that made him mad. And “Scott’s Folly,” of course, in which the millionaire built a mansion he never meant to occupy, gorgeous from the front, nothing but a high brick wall in the back to block the neighbor’s light and devalue the lot.

But remember, reminded the Times in 1911. James Scott, branded a gambler and a lowlife, just had a “cynical view of human nature” after his generosity with his own money, loaned to dozens of needy friends, was betrayed. Oh, and because that one time, he lost $86,000 in a faro game in St. Louis. The house wasn’t playing fair, though. So you can understand why he might be bitter. Plus, he had friends in high places (Senator Thomas Palmer; US Postmaster General Don M. Dickinson, Lord Sideburns)  to defend his honor.

I don’t know a lot about Mr. Scott and his fountain besides the second- and third-hand accounts I’ve read, and it does make me suspicious that the biggest objection to this gift would be the fact that he liked poker and ribaldry at the Russell House. He probably wasn’t alone.

So far be it from me to believe the rumors that he was a mean-hearted playboy who never amounted to anything. Even if he was, his fountain — designed by architect Cass Gilbert, made of white marble and completed in 1925 — is pretty great, so I’ll forgive him. Any reason why I shouldn’t? Let me know. 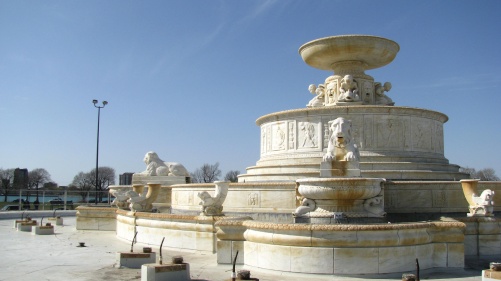 (Not in its full glory for the season quite yet — when I visited last week, it looked like the Fountain was undergoing some brick work.)

(Oh, AND! In that pile of Kodachrome slides from my dad’s closet we found a ton of night shots of the Scott Fountain. As I’m digitizing them, by the way, I’ll be sharing them on one of those new-fangled “Tumble blogs” the kids seem to like. Not much to look at yet, but stick with us. We’re going places.) 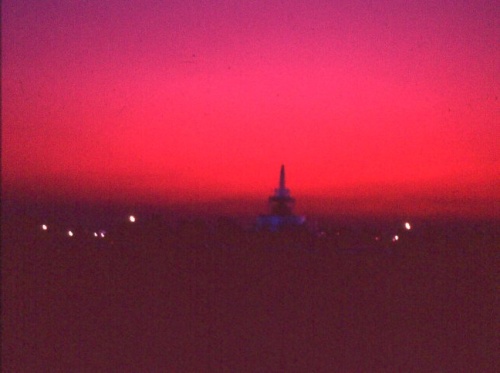