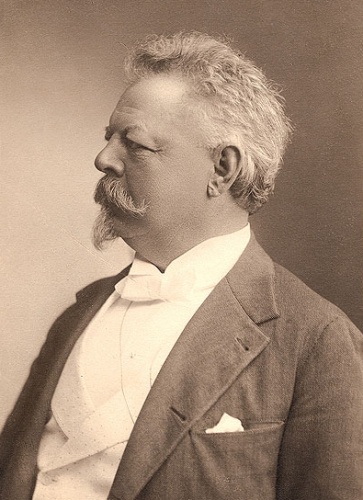 If you’re enjoying this blog, you have, in part, this man to thank. Explaining why requires a detour from Detroit for today, but I hope you’ll humor me.

This is Captain Frederick Pabst, and this Sunday will be the 174th anniversary of his birth in Saxony in 1836. When he was 12, he immigrated with his parents to the United States, first to Milwaukee, then to Chicago. Before long he was working as a waiter, then a cabin boy, on the Great Lakes. By the time he was 20, he was first mate on the steamer Traveler. He saved passengers from the burning wreck of the Niagara, today still buried underwater and covered in zebra mussels not far from Sheboygan. At 21, he became Captain, as he would be known for the rest of his life, of the steamer Huron.

I read once, and only once, in The Pabst Brewing Company: History of an American Business (as recounted here), that Captain Pabst met his future wife, Maria Best — the young heiress to Phillip Best’s beer dynasty — when he saved her from icy Lake Michigan after she accidentally fell from the gangplank of the Comet.

The story is most certainly arcane, but I think this was the crystallizing moment for me, the pinpoint-able instant where I became transfixed with the Pabsts, and more generally, with the stories of the people behind the things and places I took for granted. I had held that cold can of swill beer so many times — Established in Milwaukee, 1844 —without a whit of wonder about its namesake.  Now I can’t drink Pabst without talking about him. (Consider yourself warned.)

Maria’s helpless-princess slip from the gangplank was the hook, but the sinker was how much Milwaukee’s actual modern-day texture can be traced to the Pabsts. From the Captain’s 1904 obituary in the New York Times:

Frederick Pabst was one of the most conspicuous citizens of Milwaukee, in whose development from a village to one of the great cities of the continent he was a large factor. Among the familiar features of the city — in addition to the great brewery — there are the Pabst skyscraper office building, the Pabst Theatre, the Pabst Hotel and the pleasure resort on the lake shore. 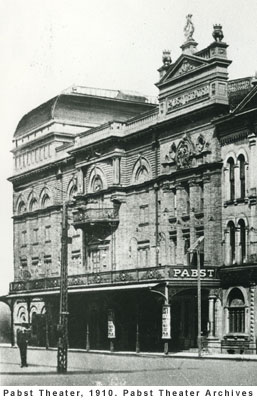 Frederick Pabst, curious and energetic, built his gilded, palatial New German Opera House in 1890. It burned down almost immediately, but the Captain had it just as promptly rebuilt, this time with state-of-the-art fireproofing, including one of the country’s very first fire curtains. It also had a rudimentary air conditioning  rig composed of fans and ice. At the opera house, as well as the Pabst Mansion west of downtown, all illumination was electrical, a major technological feat at the time. And it was all built in the grand Flemish Revival style, red or cream brick and stone with gables, Gothic arches, spires and turrets. It was Deutsch Athens, the center of German society away from Germany, and it was a boom time to live in Milwaukee. 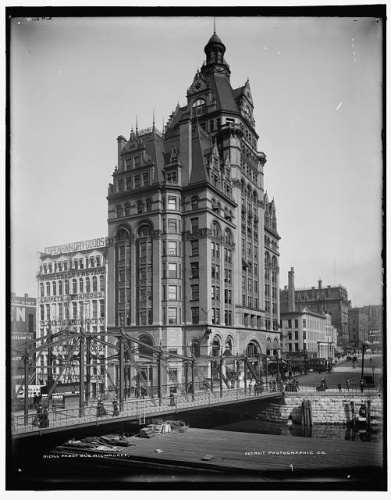 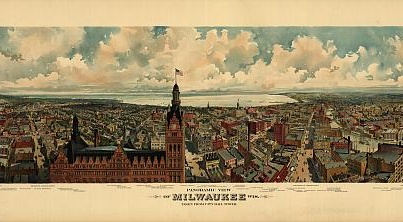 Captain Pabst was a city Alderman, Maria a cosmopolitan supporter of music and the theater; both of them worked philanthropically to help the poor, patronize the arts and support women in business.  As I learned more about them, I started to see them as the Fords to my Milwaukee, without the unsavory sniff of racism that complicates Detroiters’ relationship to the man that made their city.

For three years I lived in a neighborhood in clear view of the those bright red letters bridged across the former brewery. I went to indie shows at the Pabst Theater and drank PBR Tall Boys at the Captain’s splendid theater and climbed its grand Carerra marble staircase. There’s a bar on the East Side, Von Trier, where the original wrought-iron-and-antler chandelier that hung in the Captain’s foyer graces the back room, or so the bartender says.

By the time I moved back to Michigan, I think I had become accustomed to wondering what glorious, mustachioed German sea captain might be lurking behind the most prosaic object, like a tin can of budget beer, a dilapidated street with a majestic name or the most unceremonious historical marker. I think of him as this blog’s grandfather, and this weekend I will drink PBR and tell some poor bored person the dramatic story of the boy from Saxony who made Milwaukee a good place for a girl like me to live.