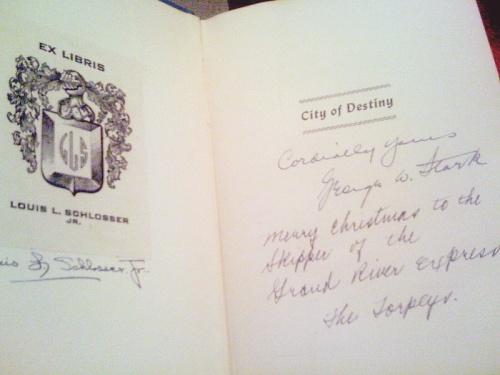 How do you ignore a book with a title like City of Destiny? Maybe if it’s crowded in with other dreamy promises with the literary fiction, you might walk right by, but not when you see it jacketed in soft blue cloth on a dusty shelf of Michigan history books. Because then you know: that’s my destiny. After all, here I am.

For some reason, I didn’t want to drop $15 when I saw this at John King on Saturday, even after I glanced a trove of newspaper clippings from the 1960s stuffed between the back pages. But City of Destiny haunted me, and when my fiancé came to bed that night, I whispered, half-crazed, “I need to go back for that book.”

So yesterday I went back for that book. When I brought it home, I opened the front cover to find the author’s autograph. And when, one-by-one, I unfolded the yellowed newspaper clippings that had stretched the book’s bindings, they were all about him: George Washington Stark.

Stark was born (on George Washington’s birthday) in 1884, the son of a Irish immigrant Great Lakes captain. He grew up in a house on Congress street near Elmwood Cemetery, which he said in an interview with the Detroit News on his 80th birthday “gave me my flair for the historical scene.”

Stark took a summer job at the archives Free Press in 1905 and spent a few years as a copywriter and a police reporter for the Detroit Times. In 1914, he left for The Detroit News, where he stayed for the rest of his career as a self-proclaimed “ink-stained wretch.” At the News he met his wife, Anne Campbell, the official News poet. That any newspaper ever employed a staff poet amazes me.

After stints as city editor (“My staff all went to war,” Stark wrote in the obituary he penned for himself, “[So] we hired a bevy of lady journalists who had just graduated from University of Michigan. I had to show them all where the City Hall was”) and drama critic (“with theater at the height of its glamor”), in 1938 William Scripps asked him to write a column about “Old Times and Old Timers” in Detroit. Through his column, Stark began to work with the Detroit Historical Society. In 1942, he became its president. “An old police reporter never looked forward to anything like this,” he wrote.

Which brings us to City of Destiny, published in 1943. It’s World War II, and Detroit is the Arsenal of Democracy, an industrial power like none the world had seen, pumping out guns, tanks, planes and engines at fever pitch. The city is growing like crazy.

George Stark remembered pre-automotive Detroit, a muddy place full of spooked horses and barn fires, but also peace, quiet, gentility and tree-lined avenues. He wrote City of Destiny, a treasure box of city history told fast and loose from Cadillac to press date, as a project in context. How did Detroit’s destiny lead from the rough river shores of Fort Pontchartrain in 1701 to the nerve center of World War II and one of the biggest cities in America?

The Arsenal of Democracy years are despaired as the late Detroit golden age of industry and prosperity, really the beginning of the story we tell each other now: Once it was great, and then it fell apart. But with so many reconsiderations of Detroit’s destiny on the table, is there value in returning to pre-automotive history, a history no living Detroiter experienced? Is it worthwhile to remember that the growth and prosperity the city experienced from the ’20s to the ’50s came almost overnight, and in chaos, and that it may have been unsustainable from the start?  Or is it too dead, too irrelevant to Detroit’s immediate concerns, to bother?

George Stark died in 1966, and in more than one of these newspaper clips, writers express some satisfaction that he didn’t have to see the ’67 riots, the rising crime, the desecration of his cemetery, the demolition of the monuments, the decay of the buildings — the end, in so many words, of Great Detroit. But in 1943, in his introduction to City of Destiny, Stark seems to get that “Great Detroit”  either always or never existed — that “Great Detroit” depended upon the industry, spirit and tenacity of its citizens only, and not its monuments or its machines.

Since Cadillac came, the community, as outpost, village, town and city, has experienced both travail and triumph, each in heaping measure. It has endured fire and famine and pestilence and somehow survived them all. It has withstood rioting and the shock of savage assault and it has recovered from the humiliation of a craven military surrender. It has been rocked by political scandal and intrigue, but in every instance, it has quickly recovered its prestige.

These defeats and frustrations have been more than balanced by the triumphs. Or, if you prefer, THE TRIUMPH, for its present eminence is the result of no recent industrial development. Rather, it is the sequence of a long progression of men and events.

… Detroit is a changed community. Gone are its years of grace; the years of the wide-spreading elms about the lazy streets … The days of our grace are gone and the streets are crowded with newcomers.

Detroiters are still alive who remember when the population figure was the only index of glory. When Detroit surpassed Milwaukee there was great rejoicing. When it went beyond Cleveland, there was cheering and dancing in the streets. Today it is indifferent to the fact that it may at any minute pass Philadelphia … There is no time to think in population figures while the job still lies ahead. But since War’s beginning, Detroit has absorbed a population that would fill Cincinnati.

Somehow the housing problem is being met. Somehow the public health is being conserved … Somehow the enormous transportation difficulty is being overcome.

Detroit is opulent and generous.

The epitaph on George Stark’s tombstone in Elmwood is stained in glass at Mariner’s Church, where his funeral was held. I don’t know if it’s a coincidence or not: 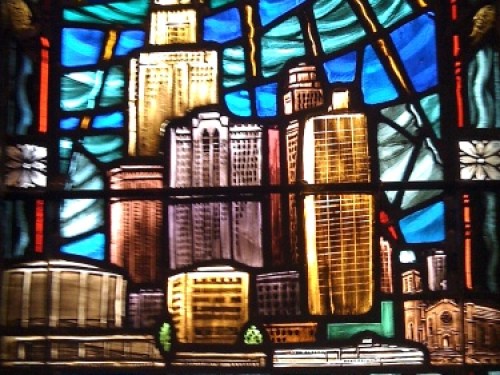 I can’t wait to spend more time with this book.