The chronicles of crows: A Tale of the Springtime (1848)

I have always been drawn to crows, not in any dark teenage-poet way, but because they are big, handsome, super-clever, and remind me of the chilly Michigan spring.

So I was excited to find this beautifully illustrated book from 1848 on the Internet Archive: 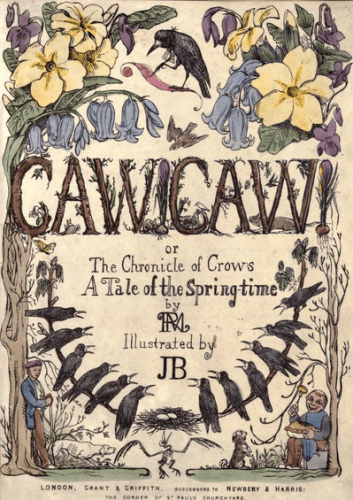 It seemed so charming at first, with the crows working together, building their homes, laying their eggs and raising their babies in great swooping flocks. 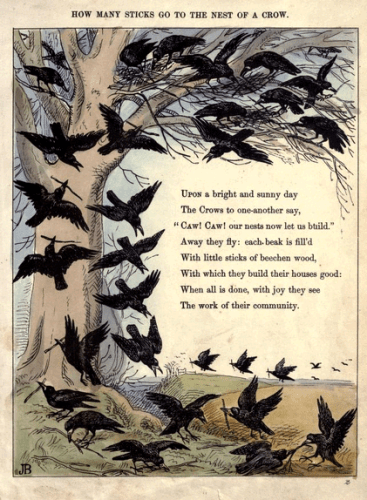 But the story takes a ghastly turn as the nearby farmers gather to get rid of the rookery. I kept thinking that the smart, sassy crows would eventually outwit the mean, brutish humans.

How wrong I was. The crows are shot and made into pies, even the young ones, and the birds that survive are left to mourn, “How well we know / There is no joy unmixed with woe.”

Um, anyway, happy spring, and here’s a Monday assortment of pertinent items to help you get over the sense of mortal dread sinking in your chest after that morbid Victorian warning.

(EDIT: Also at the Detroit Science Center on Thursday, Silverghost provides the soundtrack for an IMAX movie about sharks. I just thought you might want to know.)

And the last wolverine living in the Michigan wild died this weekend. We saw the wolverines at the Detroit Zoo this weekend. They run funny. I like them.

The “Wolverine State,” by the way, was never home to many wolverines. The nickname is not a very nice one, either, and legend holds that we either got it from Ohio during the Toledo War or the American Indians during the 1830s because we were a weasely, smelly, greedy, nasty lot.

We just went with it. Now it’s kind of bad ass. I like it.