Thomas W. Palmer, and his Park

“Built in 1885 as a Summer house or Cottage by Thomas W. Palmer (1830-1913), prominent Lumberman, United States Senator, Minister to Spain, and President of the 1893 Chicago World’s Columbian Exposition Commssion.
The land was purchased from the United States Government in 1833 by his Grandfather, Judge James Witherell.

In 1895 Palmer gave 120 acres of adjacent land to the City of Detroit as a park. Two years later the Log Cabin itself was added to the gift. In 1897 the area was officially designated

Something I hope you all realize about this blog is that I’m playing it by ear. As a former editor, I know better than to go without an editorial plan, but despite a few half-hearted attempts, I don’t have one. I have no formal scholarly training in history at all, let alone Detroit history. I can barely operate our digital camera.

On good days, I like to think that imparts a sense of adventure around here, and on especially self-inflated days, I think that the thrill of discovery is what my blog is really about. On dark days, I feel like a hack of the highest order, and in frustrated moments, I realize I’m a few steps too far behind some pretty obvious details.

Today, for instance, I made the connection between General Friend Palmer, whose memoirs we explore here on a semi-regular basis, and the more famous Detroit Palmer, Thomas W. Palmer, whose sprawling property at present-day 7 Mile and Woodward encompassed Palmer Woods, Palmer Park and the Detroit Golf Club.

They were cousins. OF COURSE. Thomas W. Palmer gave the eulogy at the General’s funeral, the text of which is printed in Early Days in Detroit. Yet I knew so little about Thomas W. until today. 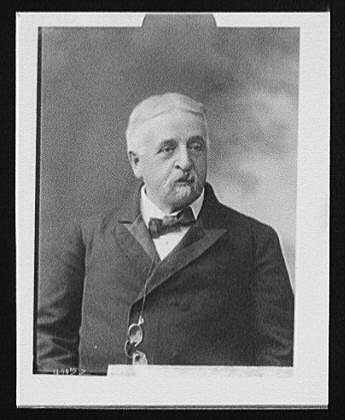 He was born in 1830, in a brick house at Jefferson and Griswold. After a year at the University of Michigan, which he gave up because of a problem with his eyes, Palmer left to travel the world with some of his friends from school, paying his way by “the Daguerrean arts.”

Long story short, when he came back to Detroit he got into lumbering, farming and real estate, and then into politics, serving as a state Senator from 1879-1880 and in the US Senate from 1883-1889, where he became an advocate for women’s suffrage. After his term in the Senate, President Benjamin Harrison appointed him Minister to Spain.

His cousin the General shares this story about T.W.’s return to Europe after the traipses of his youth:

After forty one years had passed, Senator Palmer returned to Spain, to Cadiz. Not as a college graduate just released from his Alma Mater and on a voyage of pleasure or adventure, but as the accredited minister of this great republic to the court of Spain.

… One afternoon, in walking around the ramparts, we came across a somewhat dilapidated Spaniard who was seated on the outer wall fishing in the bay.

Senator Palmer accosted him in Spanish and said, “Well, my friend, I see you are fishing here yet after all these years,”

“Oh,” said the chap with the rod, “that was my father.” And they two had, by constant use all the years, at that point worn quite an indenture in the stone coping of the wall.

Thomas W. Palmer inherited the land that is now Palmer Park from his Grandfather, a Supreme Court Judge of the Michigan territory. In 1885, Palmer commissioned a rustic log cabin on the land to use as a summer home. 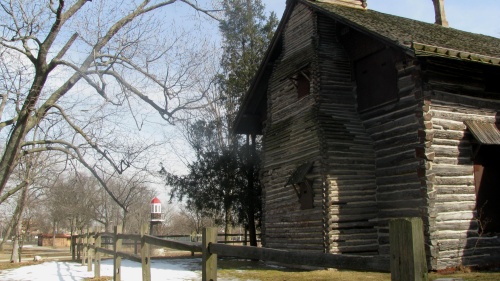 In 1895, Palmer donated the land to the city of Detroit for use as a park, on the condition that none of the virgin forest be destroyed (it was sometimes claimed that there was a greater variety of indigenous trees and shrubs in Palmer Park than in Europe. Any arborists out there want to take that on?)

In 1897, he donated the cabin, too. The park was dedicated to him the following year. 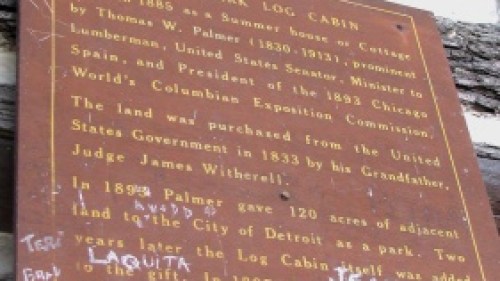 On the lawn near the cabin is a massive bell, old-world and emerald with patina. Cast in Spain in 1793, then taken to Mexico, it was a gift to the Senator from some of his political friends: 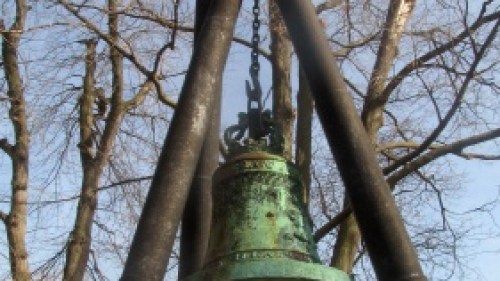 At one point, Palmer’s cabin was home to other mementos of his service in Spain, including a plow and ox yoke from the convent La Rabida, whose prior convinced Queen Isabella to send Christopher Columbus on his expedition to the Americas. And General Friend writes adoringly of some of Lizzie Palmer’s “old-time” furniture, as well as some curious leather fire buckets he admired.

Palmer Park is also home to the Merrill Fountain, which was commissioned by Lizzie and unveiled at Campus Martius, in front of the old Detroit Opera House, in 1901. If you zoom in really close on this image of Woodward Avenue in 1917 (via Shorpy), you can see where it used to be:

The turtle is beheaded, but I love the cattails and the bearded fish: 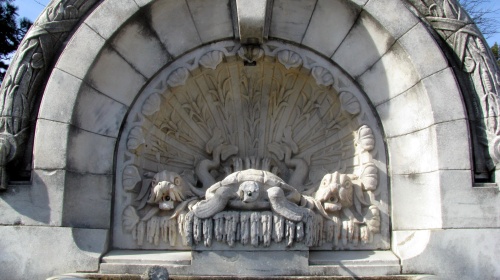 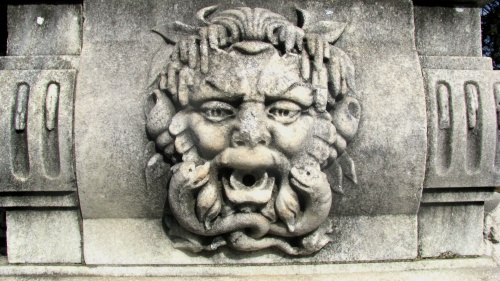 The fountain is no longer in working order. It was moved to Palmer Park in 1926.

For more on Thomas W. Palmer, I enjoyed skimming this biography, by Agnes M. Burton.

But for more, extraordinarily more, on Palmer Park, please check out this beautiful Souvenir, published by the Silas Farmer Company in 1908. 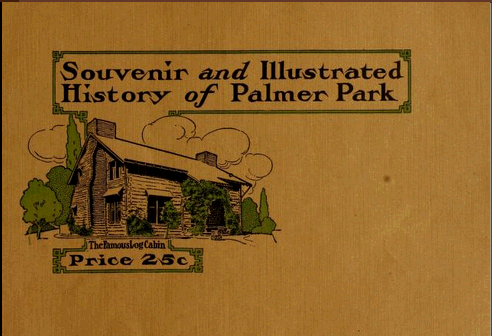 “Asked what his motive was in donating Palmer Park to the people of Detroit,” writes the author, “His answer was: ‘The good of everybody.'”