In the fall I wrote about the Peace Carillon on Belle Isle, an 85-foot limestone tower dedicated to Detroit News advice columnist Nancy Brown. It’s gorgeous, even though it’s starting to fall apart a little. 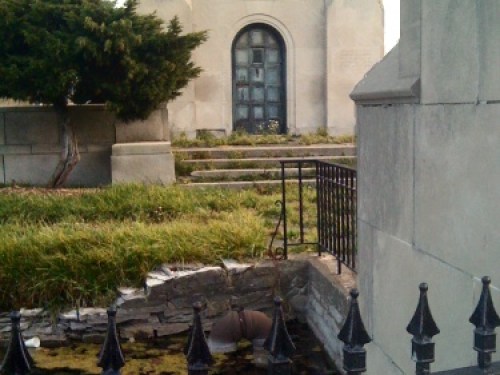 So. Over the holidays, my fiancé’s uncle gave us a big box of antique books, figuring (uh, correctly) that we were into that sort of thing. We packed them up, brought them home and then forgot about them for a few months.

We’re moving at the end of the week, and I’ve never really unpacked since I moved here from Wisconsin, so we’ve spent some time purging our hoard of clothes we might wear sometime, disassembled bikes we might put back together and ride sometime, CDs from the mid-90s that we might enjoy hearing again some (far distant) time, and, in particular, long neglected books that we might read sometime. This included the box full of antique books from Christmas, water-spotted and redolent of mildew.

Scott was the one who noticed Experience.

Published in 1932 at the Lakeside Press in Chicago by the News, the book — edited by Nancy Brown herself — shares twelve years of her favorite letters, from run-of-the-mill domestic quandaries (“What to do about my husband? Mom doesn’t bake the cookies we like anymore!”) to pining letters from homesick expatriates and too-long notes just to say hello and share an idle opinion. A girl from London who went to University of Michigan and fell in love with the city, then felt lonely for it when she went home to England, and had her husband write back to Nancy when she went blind. A Japanese houseboy who loved Belle Isle, but thought that the city’s pace was the “speedometer of a bee hive” and struggled to adjust.

I haven’t read a lot of these letters yet, but for the most part I love how rambling and earnest they are. They’re not Dear Abby-style, boiled down to the barest inquiry about in-law etiquette or what to do about a disloyal friend. Maybe they weren’t published in their entirety like they are in the book, but some of these letters are three or four pages long, full of asides, scene-setting and narrative development. Sometimes Nancy only responded with a sentence or two of thanks for sharing and a cheery “Write us again.”

The best one I’ve read so far is from “A Pioneer” (1928), who left his home in the city, doctor’s orders, when he contracted tuberculosis. He found a patch of woods he liked at the end of a rail line in Canada, started sleeping in a tent under a rock ledge, then he taught himself to trap furs, made a little extra money, built a log cabin by the lake, tried a little gardening and just sort of figured out how to live year-round in the wild.

I have kept buying a little at a time, till now I own over 2,000 acres, including the lake and the falls, all timber, except for my clearing. This is, in a sense, money wasted, for the land has no market value, and so long as I live I shall never cut a tree that is not necessary.

… There are neighbors two days trip to the South by canoe, while to the North, in two weeks I have found no sign that anything human had been there before me. I now have two horses, two cows and several chickens, a tractor and all the machinery I can use on the farm … I must get the work done in the least time possible for it is in the summer and early fall I study the game trails and plan my winter trap line.

So what’s the problem? The wife at home liked the farm and the up-north country folk, but one morning while they were eating breakfast, a bear (a friend of the pioneer’s since it crawled up in the tent with him one winter as a cub) wandered into the kitchen and asked for a biscuit or something. The wife freaked out, hit the bear, left town, then demanded her husband sell his land and come home! WHAT IS A PIONEER TO DO?

As ridiculous as this story is, Nancy recommends that the pioneer explain to his wife exactly how much money he’d managed to save as a trapper (seems he’d kept it kinda DL) and let her know that she could enjoy an occasional nice party and visitors at the farmstead in the summer and some alone cash-incentive’d alone time in the winter.

Not bad advice. I wish I knew what happened.

There’s so much more I want to share about this book, and I’ll try to post more terrific stories from Experience as I come across them. This book has made every stress of our move seem totally unimportant — a Christmas present I didn’t even know I had.