We got off M-14 at Beck Road on our way home from a lunch date in Ann Arbor. My mom wanted me to pick up some cookies. I obliged.

Since my parents moved to Novi in 2004, I’ve driven past Maybury State Park, bordered by Seven Mile, Eight Mile, Beck and Napier, hundreds of times. A friend of mine from high school worked there the summer that their barn nearly burned down.

“Maybury State Park? What’s that?” Scott asked when we passed it.

Lucky for me AND my blog, Maybury State Park has a pretty incredible story. 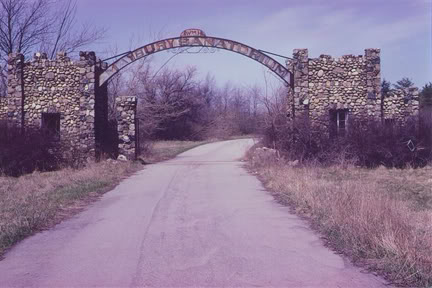 In 1919, the city planned a massive tuberculosis sanitorium to free up hospital beds in the city, contain the risk of contagion to the community and provide consumption sufferers proper care, clean conditions, lots of space and fresh air. They bought almost 1000 acres of land in Northville, out in what must have been rolling country at that time, but still within a day’s drive.

Up sprouted a sprawling, pastoral complex of dorms, a school, treatment facilities, residencies for doctors and nurses, even a farm that provided food and dairy for Maybury’s  boarders.

Maybury is named for William H. Maybury, cousin of former Detroit mayor and Grand Circus Park sitter William C. Maybury. William H. was a wealthy bachelor and real estate tycoon who sprang at the chance to get back into public eye when his cousin was elected to office. William H. basically built the place from the ground up, serving as project manager, architect and engineer. His facility opened in 1921 and was named after him in 1927. Maybury died of complications from … what else? … tuberculosis, in 1931. The facility remained in operation until 1969. 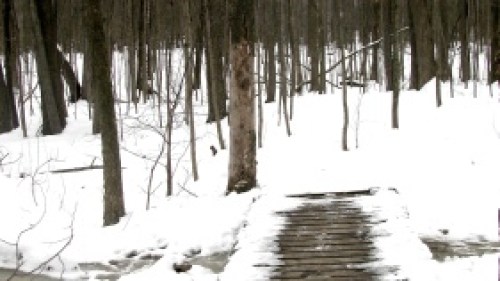 Today I went to Maybury to take a look around. I brought Dodger, the brattier of my mom’s border collies. We took a long, soggy walk on the snow-padded trail around the fishing pond, and Dodger ran laps on the piers. I knew about the new Maybury History Trail, which is really what I came to see, but after an hour of getting my feet wet and consoling the dog, who was a little wired from smelling so much horse pee and freaking out about some spooky uprooted trees, I had no idea where I was and just wanted to be warm again. 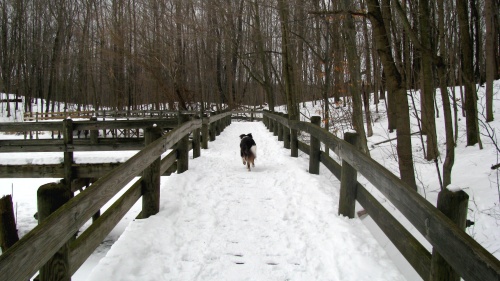 I realize now that I just used the wrong park entrance. So, I’ll be back again this week. CLIFFHANGER!

Meanwhile, read more about the Maybury Sanitorium at MayburySanitorium.com (right?!). Because I screwed this one up, here’s a video of my unusually confused dog. Why not.