So, we’ll see if this sticks. But for this Friday, at least, welcome to Fridays with General Friend Palmer. If you hate this I’ll stop it, but I don’t think you’ll hate this.

This week: The General has a whole chapter on Detroit fires that he remembers, specifically fires that destroyed famous buildings. When a wool mill on Randolph street caught fire in the summer of 1832, Friend writes, it “lit up the whole county of Wayne and parts of Canada, apparently … Out where we lived, on Woodward at John R., the illumination was so great one could see to read by it.”

I was really taken with his account of the fire on the steamer Great Western, which went up in flames while it was docked in Detroit sometime around 1838 (his memory was bad when he wrote his book and he died before his editors could help him do rewrites):

One important fire, and so considered at the time … and that was the partial burning of the then finest and most magnificent steamer on the lakes, the Great Western, while lying at her dock, Gillett & Desnoyer’s, near foot of Shelby Street. It happened about 1838 on a summer Sunday afternoon, about 5 o’clock. I have forgotten the exact date. She had arrived that forenoon on her down trip from Chicago to Buffalo. I was present at the fire with engine company No. 4 (that far off time, it seems but yesterday). She was the pride of the lakes, and of her owner and commander, Captain Augustus Walker. She was the first steamer to have her cabins on the upper deck, passengers heretofore having had to dive down between decks if they had any idea of sleeping or eating, and most of them had.

The news that this steamer was ablaze spread like wildfire and hurried everyone to the scene; indeed, all Detroit was on hand. The engines hustling down Wayne and Shelby Streets came near running over the men and boys who had hold of the drag ropes, so wild was the excitement. No. 4 engine company came first in this encounter. It had its station on the dock between the warehouse and the burning steamer, and three of its members had the post of honor during the fire. William Green, the foreman who had the pipe, was assisted by Barney Campau and Kin Dygert. They held the fort, so to speak. They were stationed on the upper deck of the steamer abaft the wheelhouse.

The scene lives in an oil painting by Thomas Burnham, a well known local artist of that day. This painting is now the property of some citizen of this city who should, it seems to me, donate it to the Art Museum or to the present fire department. The upper cabins of the Great Western abaft the wheelhouses and the ladies cabin below were badly wrecked; otherwise the steamer did not sustain much damage. But it was a most exciting fire while it lasted as any one now living who was present at the time will I am sure bear witness.

Okay. I love a sleuth. Where’s this Thomas Burnham painting? Did “some citizen of the city” give it to the now-DIA as General Friend Palmer thought he or she should? Not sure, although an online collection search turns up another Thomas Mickell Burnham painting, First State Election in Detroit, Michigan, 1837 (timely, right?):

And the man was apparently known for his marine and maritime paintings as well, like this one, An English Cutter Gives Chase to a Smuggler, 1836: 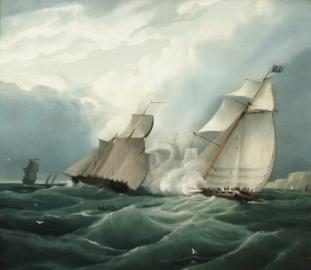 So where’s the burning Great Western? Does it indeed belong to the fire department? Is it in some art historian’s special collection of boat paintings or a museum’s American Art gallery?

I’ll put out some feelers. I haven’t really looked yet, having just learned about this painting about a half-hour ago, so if it’s somewhere obvious, tell me now.