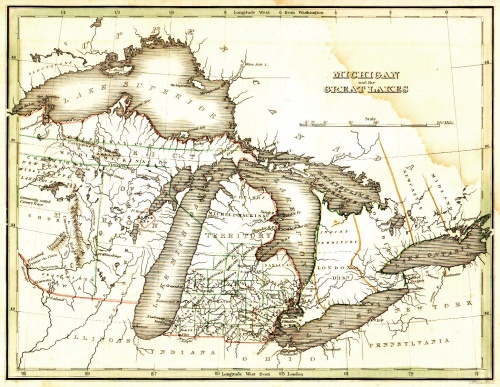 On January 26, 1837, nearly 150 years after the earliest known use of the name “Michigan” on a map, Michigan was officially admitted to the Union.

For a long time I had this confused, baseless idea that territories just sort of naturally, peacefully shook out into states, in rapid succession, during the first 50 years of the 19th century. I don’t know how that got into my head, but it’s wrong! And in Michigan, the story of the fight for statehood is amazing. Consider this:

In 1831, Stevens T. Mason — whose father John had been sent to the Michigan territory, then to Mexico, by President Andrew Jackson — succeeded his father as Secretary of the Territory at just 19 years old. When Lewis Cass left Michigan to serve as Jackson’s Secretary of War, Mason acted as Governor, even after Jackson appointed a new Governor, George Porter, who spent a lot of time away.

In 1832, a devastating spate of cholera broke out in Detroit, killed Father Gabriel Richard, and panicked everyone. The same year, Mason began a territorial census. Before its completion in 1834, another cholera epidemic wracked the city, killing nearly a seventh of Detroit’s population, including Governor Porter. Stevens T. Mason became Acting Governor — at age 22.

In September 1834, the finished census confirmed that the territory had a population of more than 87,000 — way over the minimum requirement for statehood. The Territorial Legislature asked Congress for permission to form a state legislature, but Ohio disputed the territorial borders, and Congress rejected the petition.

Thus began one of my favorite episodes in arcane Michigan history: The Toledo War.

Ohio passed legislation in 1835 asserting claims to the disputed Toledo strip and forming county governments within its borders. Mason responded with the Pains and Penalties Act, which made it a crime for Ohioans to govern within the strip. Both states called their militias to the border.

No life-threatening casualties were incurred during the conflict and parties disagreed on whether any shots were ever fired. The “war” was mostly scuffles between roving posses, citizen arrests and mutual harrassment. But President Jackson was really scared that Ohio and Michigan were on the brink of full-out war. So he had Mason, a famous hot-head, removed from office and replaced.

Congress wouldn’t admit Michigan to the Union until it ceded Toledo to Ohio, and throughout 1836, Michigan rejected the President’s consolation — the Upper Peninsula. But the state was almost bankrupt, Governor Mason kept pushing, and finally, in December 1836, a convention in Ann Arbor approved the compromise. Statehood at last!

Message of the Acting Governor, Stevens T. Masons, to the Legislative Council of the Territory of Michigan: 1835

Stevens T. Mason is buried in Capitol Square Park in Detroit, currently undergoing redevelopment. He died in New York in 1843. In 1905, a commission, appointed by Governor Fred Warner, successfully oversaw the relocation of Mason’s remains: