I wish I knew! The man was apparently one of the most important Michigan historians in history (which seems like a strange thing to say) and wrote dozens of books including the seminal, oft-referenced 1884 tome History of Detroit and Michigan, 1890’s History of Detroit and Wayne County and Early Michigan, as well as lesser known classics like All About Cleveland; The Young Men’s Christian Associations Hymn Book; Guide to the Streets, Street Pavements, street car routes and house numbers of Detroit and The Drinker’s Dictionary (which I would really like to read).

All I know about Silas Farmer at this point is from a foreward to Silas Farmer’s book, Souvenir of The Pointe: Grosse Pointe on Lake Saint Claire, graciously reprinted from a 1974 edition of the book by the Grosse Pointe Historical Society:

Son of John Farmer, Detroit’s earliest map publisher, Silas Farmer began his career by following in his father’s footsteps.  While working on maps, he conceived the idea of writing the history of Detroit and was soon launched on a literary career. 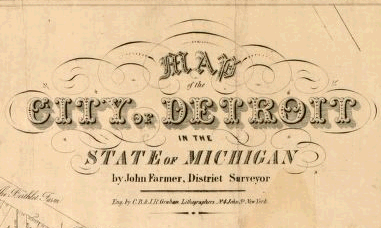 John Farmer: Map of the City of Detroit in the State of Michigan, 1835. Library of Congress.

John Farmer, born in New York in 1798, moved to Detroit in 1821 at the invitation of Governor Lewis Cass. He was an admired and eccentric character in the city, as General Friend Palmer recalls in his memoir Early Days in Detroit. Palmer remembers Farmer’s sawed-in-half schoolhouse — with a bell! — and his cartographic fire:

I think John Farmer lived on the opposite corner of the same streets, in a frame dwelling on the rear of his lot, and I also think he carried on his map-engraving and printing in the same house. This building was once a part of the old wooden building that stood on the corner of Griswold and Larned, where is now the Campau block. When Griswold was widened, it was found that this building was in the way.

… The common council ordered it sawed in two, and John farmer bought the part that was in the street and moved it to his lot on Monroe.

Farmer was a wonderful man in his way, a most competent surveyor and a finished engraver, as the work on his maps show. Endowed with surprising energy, it always seemed to me that the steam engine within him, so to speak, must sooner or later wear him out, and it did. I knew him intimately and when I was in business sold thousands of dollars’ worth of his maps.

All Palmer writes about Silas is that he helped convince the city to rename part of Grand River East “Wilcox Street.”

Silas was born in June 1839; in 1882 he was chosen as City Historiographer of Detroit. And sometime around 1878, Silas Farmer wrote an Illustrated Guide and Souvenir of Detroit, one of a series of guides and souvenirs Farmer published under his own imprint at the end of the 19th century.

I found several endearing passages and illustrations from the 1878 edition, although there are a few updated versions available on the Internet Archive. The whole thing is basically a TOUR ITINERARY, which as you may know is my favorite thing, although on this occasion I feel no reason to actually take the tour, as I’m confident that mostly nothing of it exists anymore.

The most comprehensive view of the City can be obtained by ascending the tower of the City Hall. Go as early as 9 a.m. Take a field glass with you, and from the window of the tower you will see sights and scenery that will well repay for the rather tiresome climbing of the 200 steps. The whole City, river and islands, and even Lake St. clair, will lie before you like a panorama. Each window of the tower will reveal beautis of its own.

The most comprehensive view of the City can be obtained by ascending the tower of the City Hall. Go as early as 9 a.m.

Take a field glass with you, and from the window of the tower you will see sights and scenery that will well repay for the rather tiresome climbing of the 200 steps. The whole City, river and islands, and even Lake St. clair, will lie before you like a panorama. Each window of the tower will reveal beauties of its own.

Here’s an illustration of the view from the City Hall tower — down Woodward, toward the river — in 1878: 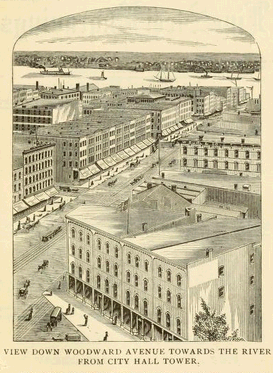 And Silas Farmer, as I do, recommends a wandering hour in Elmwood Cemetery: 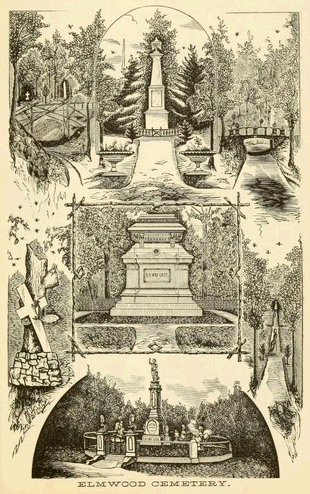 [From McDougall], A walk of some five blocks on Elmwood Avenue will bring you to Elmwood cemetery, where an hour or more can be spent very pleasantly among the many beautiful walks and drives and monuments.

Again taking Jeffereson Avenue to the eastward, within the distance of a block from Elmwood, you pass on the right the immense stove factory and warerooms of the Michigan Stove Company; and immediately afterwards, the Old Pontiac Tree, like some Rip Van winkle of the forest, stands before you.

Did you know that in the 1880s, Detroit was the stove-making capital of the world? Neither did I, but it seems that the fates of the Stove Company and the Pontiac Tree were intertwined, or at least of mutual interest.

As usual, half of what’s so interesting about these old pamphlets are the incredible advertisements: 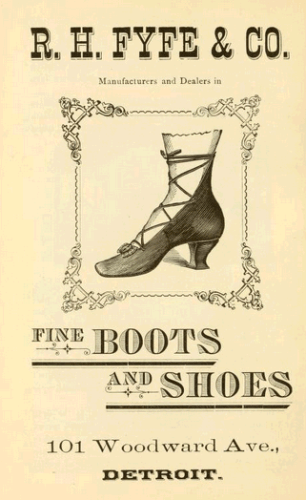 Turkish baths? Why don’t we still have those?

And who was Silas Farmer? Where did he live?  Did he write a diary? Or letters? Where is Silas Farmer hiding?

Help me out, America!