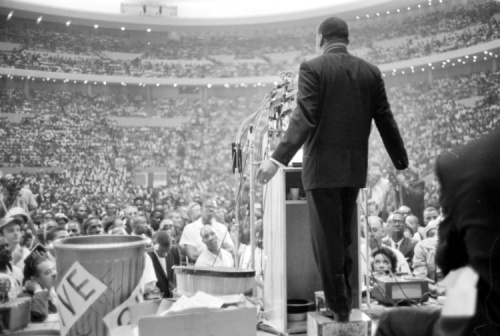 I have a dream this afternoon that one day right here in Detroit, Negroes will be able to buy a house or rent a house anywhere that their money will carry them and they will be able to get a job.

June 23, 1963: Months before the March on Washington, at the Great March on Detroit, Martin Luther King, Jr. delivers a version of the speech that would immortalize his spirit and his movement.

When I think about King’s legacy in Detroit, I think about the city’s motto. Gabriel Richard wrote it after a fire that leveled the city in 1805: Speramus Meliora; Resurget Cineribus.

We Hope For Better Things; It Shall Rise From the Ashes.

There’s an easy takeaway that we all remember on MLK Day — the stuff we learn in grade school. Love each other. Respect each other. Strive for the common good. Okay.

But there is another and more brutal truth in his message — the truth of enduring struggle. The fighting, the tireless pushing, and the constant defeat.

Martin Luther King didn’t give Detroit the promise that it would rise. He didn’t promise that in a just and integrated world, leaders would bring progress and people would prosper. But Detroit’s proud and strong black city leaders, thinkers, business owners and activists, whether they succeeded or not, have been able to do so on their own merits — judged not, as Dr. King said, by the color of their skin, but by the content of their character.

As much as Martin Luther King gave Detroit the freedom to flourish, he gave it the freedom to fail. And that is, in many ways, a miraculous thing. Martin Luther King’s dream was so vast and so brave, and rereading the speech he gave in Detroit, the first thing I think is: we can still do so much better. And that is a lucky thing to be able to think.

Wayne State University’s Virtual Motor City collection, by the way, has a terrific collection of photographs from the Civil Rights era and other major social movements in the city. Nose around this evening while you’re reflecting on the day.

For a meatier take on the holiday, and the man we honor on the holiday, you may want to read the MLK Day post at  The Edge of the American West, a great blog written by a cabal of erudite history and philosophy scholars. Discussed: King’s 1968 speech in Grosse Pointe (“A riot is the language of the unheard,” King said then), John Conyers and corporate sponsorship of the bill to make MLK Day a national holiday, and the anger and danger in King’s philosophy that are largely diluted in our contemporary portrait of the man and the message.