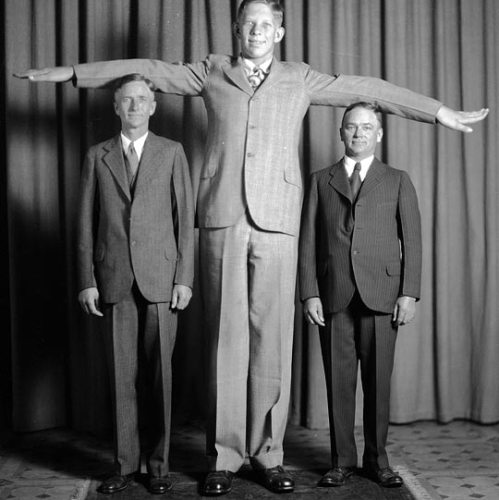 This weekend, for the first time since moving back to Farmington, we finally made it to that chapel of childlike astonishment, Marvin’s Marvelous Mechanical Museum.

My many, many visits to Marvin’s — as an awestruck child, a teenager with nowhere to go on a summer night, an adult with friends in town to impress — all feel indistinguishable, like they’re stitched with the same shiny thread. But my memories of Marvin’s are deeply sowed. The promise of a fortune, a glimpse of the future, just a hint of the naked and lurid that Marvin’s antique peep shows, carnival attractions and terror games offer are all just a little forbidden, and so alluring. With an always-clanging 55-piece mechanical orchestra, dozens of noisy pinball machines, fit-inducing flashing lights, skee ball, fun-house mirrors and the intoxicating smell of popcorn, the place is a perfect storm of sense-pounding entertainment. 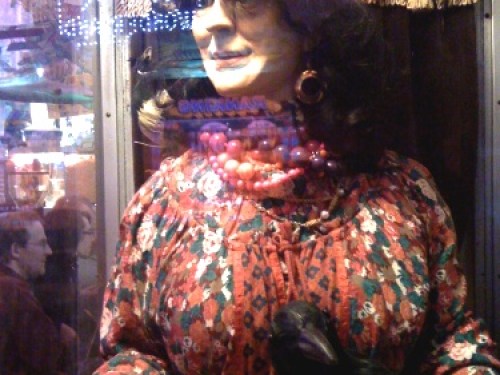 In front of the statue is an old color TV. Drop 50 cents in and you can watch a flickery video about the brief and extraordinary life of Robert Pershing Wadlow who, due to a hypertrophic pituitary gland, never stopped growing. He was as tall as I am now — about 5’4” — by the time he was five. At 13, he was the world’s tallest Boy Scout at 7’4”. When he died in 1940, he was 8’11”.

In the middle of this whirring palace of diversion, we watched in sad amazement. Robert Pershing Wadlow lived, on the one hand, a fast, charmed life. An American celebrity, Wadlow traveled the world, making public appearances on behalf of the Ringling Brothers and the International Shoe Company. He took photos and collected stamps; his family and his community adored him.

But in every photograph and video of Robert Pershing Wadlow, he looks so fresh and young. He was so young — he was just a giant, unwieldy kid. What it must have been like, as awkward and gut-wrenching as it is for anyone to grow up, to grow up gigantically? Most people know what it’s like to not fit in, but what was it like to literally not fit in to the world around you? How lonely was that?

When the video was over, I was shaken, and Scott had tears in his eyes. Marvin’s was still yowling behind us, but it took us some time to regain our composure.

The next day, a friend came to town from Switzerland via Milwaukee via Harvard. Over sandwiches and coffee on a windy patio in August, I’d promised to give him the best tour of the city I could if he visited me. And visit he did, with a lecturer friend in tow from the University of Michigan school of architecture.

Neither of them had been to the city, and we had some grandeur planned. But by the time we finished a warming round of Manhattans at my friend’s house in Corktown, dusk was taking hold of the city, and it was already bitterly cold.

We drove out to the east side, not sure if we would even have the chance to get out of the car. We didn’t. But it was the first time that I’d ever seen, in person, the Packard Plant, an enormous, persistently photographed legend of Detroit urban ruin.

Designed by Albert Kahn and built on almost 40 acres, the Packard Plant was one of the largest and most advanced automotive factories in the world when it opened in 1903. Eleven-thousand workers used to build cars there. When Robert Pershing Wadlow was breaching seven feet, the Packard was the best-selling luxury car in America, outselling Cadillac, Lincoln, Peerless and Pierce-Arrow combined. Now the factory, I’ve read, is the most expansive abandoned industrial site in the country.

As we approached the complex, I held my breath. 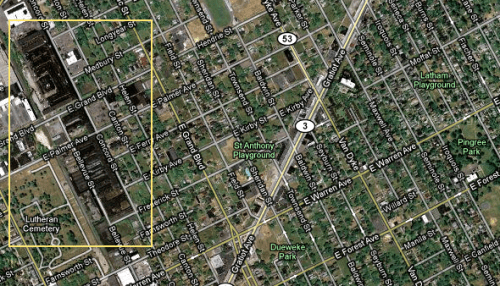 On our way back, we stopped at the Heidelberg Project, which is a pretty creepy place at night — lumbering figures in the trees, sentries in the grass, big signs scrawled with the word “God.” We crunched down the middle of the snow-caked street, barely speaking to each other, just watching the shapes and shadows. A pheasant whistled overhead. At the end of the block, kids roughhoused on their porch.

Robert Pershing Wadlow was just 22 when he died of an infection from a leg brace. The Packard Plant closed in 1957.

I’m usually quick to get snorty about a fixation on our ruins, even though I tended to fantasize about them when I was living away. And with the national media lens focused tight on the city, it’s de rigueur right now, in some circles, to tell only positive truths about Detroit — as though every blown-out photo essay of decay is a betrayal.

It took Robert Pershing Wadlow, the gentle Alton giant, for me to accept the mesmerizing reality of Detroit’s out-sized wrecks. With every other layer stripped away — pity and sadness and politics and symbolism — there’s an immense sense of marvel, with all of the danger and fear that comes with it. Standing under a towering statue of the world’s tallest man in a busy arcade, and gazing up at the Packard Plant on a still, icy night, you feel a silencing, sensory rush.