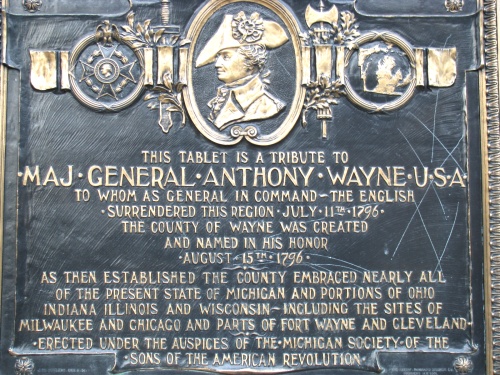 On what one might imagine was a cold winter morning in Chester County, PA, on New Year’s Day, 1745, the baby who would become the young, fabulous, decorated Revolutionary War general — and securer of the city of Detroit — Anthony Wayne was born.

As a child, Mad Anthony was hilariously precocious, staging grand battles in the schoolyard, which eventually got him expelled. Here’s a letter from the headmaster to Anthony’s father Isaac:

As a student of books I really suspect that parental affection blinds you and that you have mistaken your son’s capacity. What he may be best qualified for I know not. One thing I am certain of, he will never make a scholar. He may perhaps make a soldier. He has already distracted the brains of two-thirds of the boys under my charge by rehearsals of battles, sieges, etc. They exhibit more the appearance of Indians and harlequins than students, this one decorated with a cap of many colors, others habited in coats as variegated like Joseph’s of old, some laid up with broken heads and black eyes. During noon in place of the usual games of amusement he has the boys employed in throwing up redoubts, skirmishing, etc. I must be candid with you, brother Isaac, unless Anthony pays more attention to his books I shall be under the painful necessity of dismissing him from the school.

I’m writing remotely, from a friend’s apartment in Milwaukee, where the burden of explaining exactly why I love Mad Anthony to people who have never heard of Wayne County, Fort Wayne, Wayne State or Anthony Wayne Street is heavy. It’s hard for me; my love for the General is ineffable, and has very little to do with his technical mastery on the battlefield (which, you know, I don’t really understand at all).

I told the story of Anthony Wayne’s deserved reputation as a high Colonial fop, obsessed with his appearance and his clothes and the presentation of his soldiers. At a parade, once, Mad Anthony was so dismayed by the rag-tag togs of his regiment, he ordered every man to wear an evergreen sprig in his cap to pull the whole spectacle together.

This reminds my friend Andrew of the New York Yankees, whose management demands that the players be well-groomed, clean cut and short-haired.

Happy birthday, Mad Anthony. Thanks for making sure a kid like me wouldn’t have to grow up in Britain.