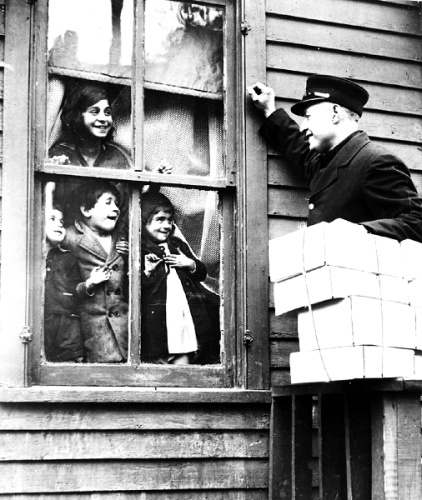 Maybe it’s just the snowy night, the glass of wine, and listening to John Vanderslice, who never fails to seize me (specifically Emerald City, which is about, you know, Baghdad, drone war, paranoia, anxiety and love thwarted by circumstance). But it’s Saturday night, we’re staying in, I’m catching up on my blog subscriptions, and this photograph just stunned me into that sort of melancholy Christmas reckoning and grateful joy in the present human moment — that dark, Victorian lining beneath Christmas as we know it today.

Wayne State’s Virtual Motor City digital collection is really something extraordinary; this is from their blog:

Not too long ago I told my father about some images that I had come across in the Virtual Motor City Collection about the Old Newsboys and Christmas.  Usually in the images as in those above, police officers and boy scouts were delivering packages to families in Detroit who were in need.  The tradition started in 1914 when James Brady founded the Old Newsboys’ Goodfellow Fund of Detroit (Detroit Goodfellows).  He and other businessmen would sell newspapers on the street (just as they do today), to raise money to provide Christmas gifts to childen.  To my suprise, my father who was born in 1927, told me that he was one of those children who received gifts from the Old Newsboys as his family had been hard hit by the depression, like so many others at that time.