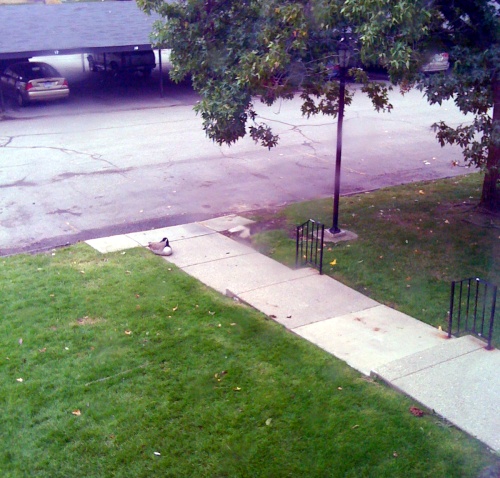 A link to this enchanting blog about wildlife in Detroit came through the wire in an email from Model D. If you have adorable Tourrett’s like I do and can’t help but point and shout at anything animate that crosses your path (for real: I have been caught talking in you-are-cute voice to flies before), this is a fun site with lots of colorful photos and edifying facts and proper names. Never before have I felt so capable of telling a brown-headed cowbird from a hopping dark-eyed junco.

Since moving here this summer, I have dedicated huge swaths of my free time to staring out the window at a Canadian goose colony that took up residence in the apartment complex not long after I did. I never thought there was anything special about a Canadian goose — just a big, messy bully and a common pest, right? But when you’re at home alone all day trying to make something of yourself, a goose is a sight to behold: a gigantic, girthy bird with a ponderous way of moving around the world and an almost Sphinx-like bearing, a white-blazed face and dark, considering eyes. They peck at the grass and take slow, showy struts through the yard, but mostly they just sit around all day, like they’re on the beach.

In the library I found a pamphlet called Farmington: An Original Entity, Being The Natural History of Farmington, first printed in 1976 and based on a series of sesquicentennial lectures given by the Farmington Naturalists Society. Volume one includes brief geological, botanical and zoological histories of the area, with inventories of local invertebrates, fish, amphibians, reptiles, birds and mammals. And the Foreword, written by series editor Jean M. Fox, seems to indicate that this publishing enterprise has been undertaken in part to contradict some popularly held opinions of the suburb:

Farmington has a long and cohesive past. It is not a twentieth century suburb plasticized from what was a corn field ten years ago, nor is it a commercial dream of a developer, long since, with bank account flourishing, moved on to greener pastures.

The volume is small and slim but full of fascinating information about the area’s biological past and speculation about its biological future. Did you know, for instance, that:

Me either! I think what I like most, though, are the moments when the authors slip out of the scholarly mode to comment, for example, on the “rogue-like” manner of the common raccoon, or lament the declined state of Farmington bass and trout fishing after the 1940s.

In the back of the book is a Nature Calendar — brief (and rather beautifully written) summaries of how a naturalist might mark the passing months in the city:

December: Mammal tracks are seen in the snow, best noted on the second day after a snowfall. The woods are quiet and observable wildlife scarce.

Winter constellations are bright in the nighttime sky. The year’s shortest days occur now, and the longest nights, until the Winter solstice begins to reverse the trend. The sun pursues an arc deep in the southern sky.

For the most part, the guide still seems pretty accurate 30+ years on, I suppose since natural history moves slowly, relative to our lives. But if a new edition is ever completed and released (and I would be interested to know the current state of wet and dry transitional meadows, marshes and peat bogs, elm and ash trees and the local climate), this speculation about the fate of whitetail deer is probably subject to re-examination:

A few white-tailed deer are still present in the Farmington area. They are rarely seen, are most active in the early morning or dusk. They are found in forested areas, about forest edges and in orchards. They are herbivorous in food habits, chiefly and grazers and browsers. With increasing development of the Farmington Area, and appropriation of their habitat, they will likely completely disappear in a few years. 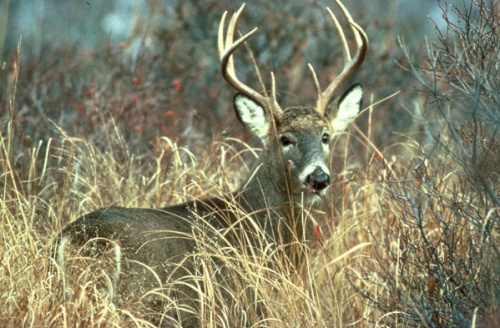 Wrong. There are more than ever. In fact, Michigan white-tail herds have survived a few periods of boom and bust since Michigan was widely settled in the early 19th century. Shockingly abundant in the 1830s, deer had been hunted to the brink of extinction by the 1870s. Stricter game hunting regulations, forest fire protection and the escape of a few tame deer reestablished wild herds in the 1920s and 30s.

I love crossing paths with deer in the woods, so I’m glad they’re still around. A comprehensive history of deer hunting in Michigan is available on the website of the Michigan DNR.