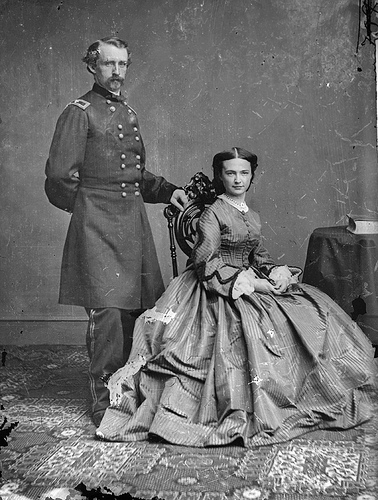 Here is what George Custer wrote to his wife on December 5, 1869 — his 30th birthday, six years before his death at the Battle of Little Bighorn.

From The Custer Story: The life and intimate letters of General George A. Custer and His Wife Elizabeth, edited by Marguerite Merington:

The fifth of this month — December — added another year to my calendar. I hope I may profit by the experience it carries with it. I have employed the time since that day with reference to my future. I have formed a resolution. In this I have not been influenced in aught but my own judgment. I have acted on suggestion or advice of no one, only according to my conscience and idea of right.

From the 1st of January, and forever, I cease, so long as I am a married man, to play cards or any other game of chance for money or its equivalent.

This is a resolution, not the result of impulse, but taken after weeks of deliberation. And in considering, and finally adopting it, I experience a new-found joy. I breathe free’er, and I am not loath to say I respect my manhood more.

General Custer: the city of Monroe, Michigan misses you, and they are celebrating the big 1-7-0 on Saturday with a bus tour of the historic downtown district, your favorite watering holes, the corner where your preferred barber shop once stood … and birthday cake. More information at the Hometown History Tours blog.