Something funny happens on Drake road between 11 and 12 mile; the stiff, airy grid streets of Farmington Hills collapse into a dark, knotty road, a valley road flanked by bluffs of boulders and trees. Driving due north from 11 mile, the road dips past a pair of old wooden houses and a stone wall over the river; across the street, a bench in a tiny, deserted park. As the road winds, you pass two palatial mansions on the east side of the street, not the kind you find in especially big, brand-new subdivisions, but the kind you dream about when you are a child — and as children, they were objects of our fantasies, full of servant girls in ruffle-hemmed gowns, noble vassals, horse stables, maybe a sinister count or a dowager duke. You can’t see them unless you squint past the gates and hedgerows, and even though the speed limit is low, the road is narrow and there is nowhere to pull over and gawk. But catching a glimpse of a sprawling country estate through the willows is so much more tantalizing.

North of the fantastical mansions is a subdivision full of later, fast food-era mansions, the Oxford Estates, and in December our aunt would drive my sister and me through the neighborhood to see Christmas lights. To the west of Oxford Estates is a hilly gated community behind towering trees that make Drake Road look like an almost rural pass.

The whole stretch is a huge part of the poetic imagination I developed as a child, a memory without reference that, when I lived in Wisconsin, floated up without warning, then passed, in about the amount of time it takes to drive the quiet, shady mile.

Now that I live here again, I drive Drake Road frequently between Farmington and my parents’ house in Novi, sometimes turning on secluded, still-gravel Howard Road and taking the long way to 12 Mile, snaking past overgrown lawns and a mish-mash of houses, some historic, some lavishly new, some seemingly empty, sometimes a curious deer ambling along the shoulder. 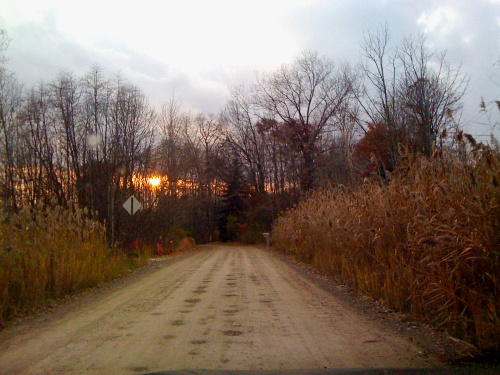 The elbow of Drake and Howard Roads, and the two old houses that mark the transformation of square suburbia into a temporary but glorious otherworld, are remnants of a historic settlement called Sleepy Hollow. Founded by New York emigres Howland Mason and brothers Edward and Harmon Steele, who built a gristmill in 1827, the neighborhood soon attracted other industrious residents, who founded a saw mill, a shoemaker’s shop, a tannery and a soap factory. The old houses — and when you know what they are, it is remarkable to realize that they’re still here — are the stooped white Miller’s Cottage and, just south of it, a cooper’s late-1830s house, set on hand-hewn wooden beams.

In 1894, Edward Steele’s grandson Frank Steele gave a speech about the history of Sleepy Hollow and his childhood memories of the Old Mill, which the Farmington Historical Commission published as a series of monographs in 1993:

Here in the early days was the social and financial life of the neighborhood. Here the stalwart young men bathed in the waters of the pond, caught fish from its sparkling waters, and skated upon its smooth surface.

On moonlight nights the hills which sloped downward to the mill were ever echoing and re-echoing to the laughter and joyous exclamataions of the boys and girls as they “coasted down hill.”

The Old Mill was always the real center of the outdoor activities. It was there they went to get warm, to sharpen their skates, mend the sled and talk over the events of the neighborhood as they listened to the splash of water over the water-wheel, and the busy whir of the machinery.

Here is where the flour covered miller with his white cap greeted his customers, asked them the news, and in exchange passed on to them the gossip told by the previous customers of the day.

The Old Mill is gone and the cottages were moved slightly to accommodate for the paving of Drake Road in the 1990s, but on the site of the pond is a small billboard of historical information, including the blade of an ice skate that was excavated during construction: 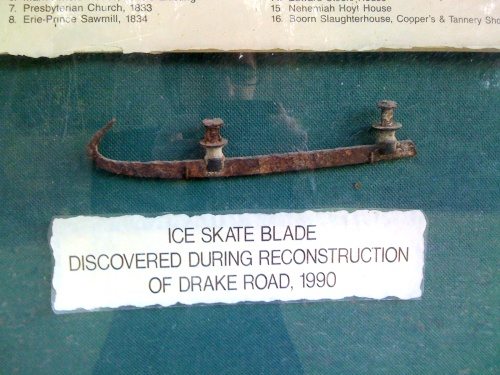 Tremendous. It’s incredible to me that I grew up less than a mile away from these people, space-wise, but 100 years away from them, time-wise, and how 100 years changed childhood — and life, really — so completely.