On Thanksgiving Day, 1920, at high noon, ground broke on Detroit’s new Masonic Temple. Evidently, thousands and thousands of people were there to celebrate.

Two years later, in September — with the trowel that George Washington used to lay the bricks of the Capitol building — the cornerstone of the building was laid in another ceremony attended by thousands of Master Masons.

Finally, in 1926, on Thanksgiving Day (again), Detroit’s Masonic Temple — the largest Masonic Temple in the world, then and now — was formally dedicated and consecrated. The neo-Gothic architecture of the temple was unusual for the time, as Knights Templar tended to prefer the classical Greek and Egyptian styles for their houses of worship. But Detroit’s masons thought a Gothic temple would appropriately harken the historic setting of the Order and the great cathedrals of medieval Europe that early masons had built.

Freemasonry really confuses me, but hey! It’s Thanksgiving, and I am grateful for Detroit’s Masonic Temple, which I visited on countless field trips to plays and stuff as a school kid. And it’s gorgeous, even though it gives off a faint aura of neglect.

So Happy Thanksgiving. Another thing I am grateful for is learning, recently, that Father Gabriel Richard was responsible for bringing the first piano to Michigan from Europe sometime during the first decade of the 1800s. The piano was a few decades away from being perfected, and who knows if Richard’s piano was cutting-edge or a used model, but he brought it into his school and, one imagines, taught his pupils to play, and that’s a beautiful thing. 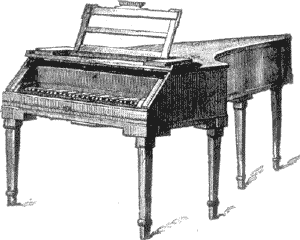