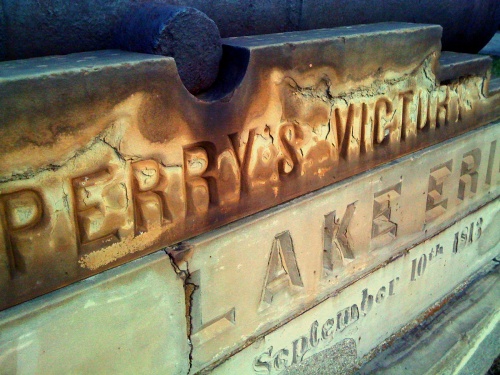 Our Detroit history tour earlier this month left us with some unanswered questions about the fate of several artifacts from old City Hall, which was razed in 1961. We found some! Including a few we weren’t looking for.

Let’s check in, shall we?

These have moved to Belle Isle, standing guard in front of the Dossin Great Lakes Museum. These aren’t at all hidden, and it’s pretty common knowledge that they’re out there, but it took me stumbling on their latitude and longitude in the Historical Marker Database while I was looking for something else for the light switch to flip. 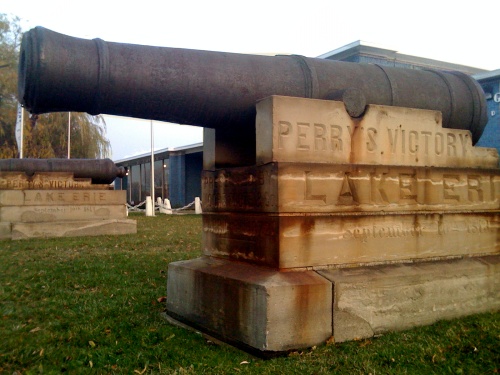 (Also on Belle Isle: the camera batteries died, which happens a lot. Forgive the phone photography.)

Whilst waiting for some Oliver Hazard Perry admirers to conclude their photo op at the cannons,  we took a walk around the park and stopped to wonder at the tremendous limestone bell tower dedicated to Detroit News columnist Nancy Brown. Surrounded by a moat and a flock of evergreens, a few of which are fallen, behind a flaking iron gate, the structure is stately but gently blighted. I think the bells still ring, though. 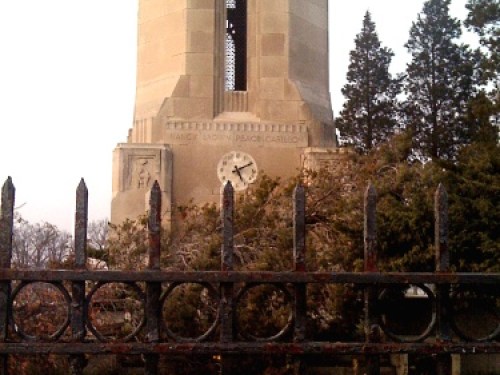 Nancy Brown was a beloved advice columnist who once inspired some 35,000 people to visit the Detroit Institute of Arts at the same time — maybe history’s first flash mob, an event the News called “Detroit’s greatest party.” Her bell tower, funded by her fervent readers, was christened in June, 1940. From a 6/24/40 Time article:

… Since 1934, at sunrise on Easter morning, Nancy Brown has sponsored a sunrise service on Belle Isle. Her readers, who flocked to the services in tens of thousands, heard preachers and speakers, but never were allowed a glimpse of her. With the fur collar of her coat turned up around her face, she mingled unnoticed among her admirers, for they had never even seen her picture.

Last week the Peace Carillon was unveiled at a sunrise dedication service on Belle Isle, and with it Nancy Brown was unveiled to her readers. Long before midnight, her audience began to gather in the grassy plaza around the limestone tower. Detroit police estimated that 100,000 people turned out to wait for Nancy.

At 4:45 a.m., as the sun rose over dewy treetops, the chimes pealed out Nearer, My God, to Thee … [and] diminutive Nancy Brown stepped to the lectern, peeped over and in a tremulous voice spoke to her readers for the first time. 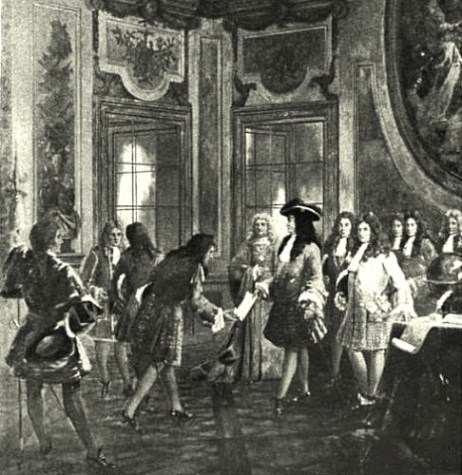 We initially thought this painting, by Fernand LeQuesne, 1902, might be in the collection of the Detroit Institute of Arts, but they told us “No dice!” and recommended we check in with the Detroit Historical Society. Curator Joel Stone says it’s in the collection for sure, but its whereabouts within the museum are still in question — Mr. Stone thinks the painting may be in storage, but his database is behaving curiously, and word on its current location is pending.

A friend recently told me about some “women statues” in a back lot at Fort Wayne, which after trying to track down the LeQuesne painting I found out were pieces of the old City Hall — statues of Art, Commerce, Industry and Justice, plus the building’s cornerstore, cornices, archway pieces and other slabs of sandstone are apparently stacked out in the woods behind the Fort.

Fort Wayne is also home to the building’s clock face and clock tower bell. I learned more at Buildings of Detroit and detroitblog, and you can too! A field trip is, obviously, in the works.