Will Detroit ever be this good again? 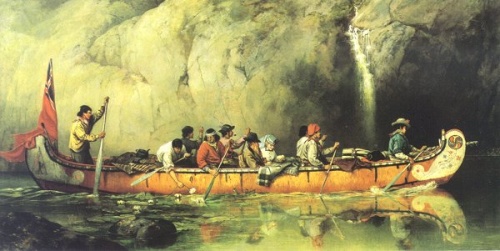 I love when people say Detroit is “a shadow of its former self,” or one of America’s “fallen cities.” The benchmark, of course, is Detroit at the height of its industrial success and the peak of its population in the 1950s. But I’ve been reading accounts of the city in the very earliest days of the fur trade and the French occupation, thinking to myself: will it ever be the same? I know what you’re thinking: grueling physical labor! the constant threat of Indian raids! no antibiotics OR contraceptives!

But I found this incredible book, History of Detroit for Young People, by Harriet and Florence Marsh, self-published in the early 1930s, and it makes the early settler days of southeastern Michigan sound pretty swell*:

I am forgetting the parties they had any time during the year that was convenient. The French, as a rule, have happy, cheerful dispositions. They work while they work, and play while they play. In spite of all the toil and hardship and real danger that these first settlers endured, both old and young were able to throw off care and anxiety and enjoy themselves whenever it was possible … [and] Every one, young and old, danced. … In those days, people really danced! Nobody sidled over the floor in our lazy fashion. These French people would never have wished to do so. If they had, they would not have dared, for their friends would have supposed they were ill, and ought to go home to bed.

Late in the 17th century, Cadillac wrote to the Comte de Frontenac that the chain of Great Lakes waters were “as richly set with islands as a queen’s necklace with jewels, and the beautifully verdant shores of the mainland served to complete the picture of a veritable paradise.” Of special interest to Cadillac was “the region that lies south of the pearl-like lake to which they gave the name of Ste. Clair, and the country bordering upon that deep, clear river, a quarter of a league broad, known as Le Detroit.”

After personally persuading Louis XIV to support a new post on the straits, Cadillac left France for Montreal and from there, on June 5, 1701, set sail with “one hundred Frenchmen and one hundred Algonquin.”

It was in the early summer, when we usually have beautiful weather. The twenty-five canoes were manned by stout voyageurs, who raced like mad over the water for two hours at a stretch, then stopped for a smoke and a rest. After this a new set of paddlers took the oars. The voyageurs had many jolly boating songs which they sang as they pulled the oars.

The Marshes include a few of these coureurs de bois folk songs in the appendix of the book, for kids at home to sing along (and for me to learn on my accordion?). They also tell charming stories that bring a playful vividness to life in the early settlement:

Cadillac brought three horses and ten head of oxen. Two of the horses died, but the fine one that was his saddle horse lived and must have been a great help to him in his journeys around the settlment … he named it Colon. Queer name for a horse, was it not? But horses get used to almost anything.

… If your father and mother had brought you to the settlement, who knows? Perhaps you might even have seen Cadillac some morning. If you had just arrived from France, even if you were a little boy, you would surely have been dressed in a little gown with long sleeves and a skirt that almost reached the floor. As you walked along, Cadillac might have come clattering by on Colon. And your mother, as she bowed to the Commandant, would have picked you up and squeezed herself into the nearest doorway. Ste. Anne Street was only twenty feet wide, and no one knows what a horse might do, especially if his name was Colon.

In an account of Detroit written for the King, Cadillac describes with most Baroque flourish the flora and fauna of the trading post, which has “never wept under the knife of the vine-dresser” or the “pitiless hand of the reaper.”

There are ten species of forest trees, among them are the walnut, white oak, red oak, the ash, the pine, white-wood and cotton-wood; straight as arrows, without knots, and almost without branches, except at the very top, and of prodigious size. Here the courageous eagle looks fiercely at the sun, with sufficient at his feet to satisfy his boldly armed claws. The fish are here nourished and bathed by living water of crystal clearness, and their great abundance renders them none the less delicious.

(*There’ll be more gems from History of Detroit for Young People later this week, hopefully including a 2009 tour of one of the recommended itineraries in the appendix. A word of caution from the authors:  “These trips are outlined with the hope that you may be able to get your father to drive you to these places. Because of the congestion of traffic in so many of the downtown districts, especially where changes of street cars must be made, it would not be safe for you to go with more than five or six companions. There should always be an older person with you.”)