But first: A few thoughts on last night's Mad Men

For a few weeks, I’ve been compiling some Mad Men-iana for the blog — notes and sources and photos, with an eye toward exploring the first few years of the ’60s as they played out in Detroit. Because the perfectly constructed, jewel-like ’60s of Mad Men is the ’60s of Manhattan white-collar professionals and WASPy suburban New York, and its not-WASPy characters and elements — the Jewess Rachel Mencken, the Draper’s maid Carla, even the specter of Dust Bowl Dick Whitman — are there to remind us of the worlds outside of Mad Men’s own orbit. It’s not a fault of the show. But in so many places, like Big Labor, blue collar, black middle class Detroit, the ’60s were experienced differently.

But I can’t not write about this week’s episode, as long as we’re on the subject. So, if you don’t want to read any spoilers, or if Mad Men‘s not your thing, do not follow the cut. However, please do enjoy this photograph from LIFE of Sebastian S. Kresge, who founded K-Mart in 1962, playing with his dog (or … a deer?). Check back throughout the week for posts on the stained glass windows of Old Mariner’s Church, coureurs de bois songs from Detroit’s bygone fur trade days and self-guided tour itineraries for the city — from the 1930s. I had a really good run at the library yesterday. 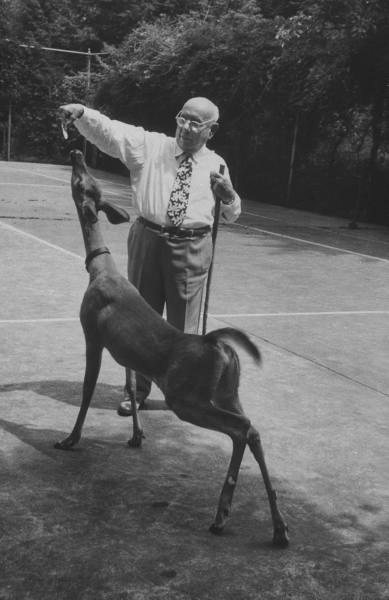 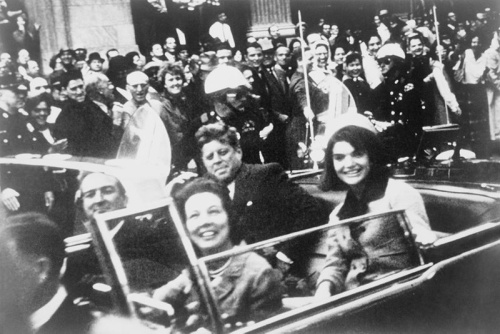 We all knew that this season would reach its climax with the assassination of the president, but knowing how the whole thing ends doesn’t make it any less chilling to watch. Did anyone else feel a catch in the throat when, in Duck’s hotel room, you heard the report of “an attempt on the President’s life” in Dallas? Did you hope he would be okay?

Just like everyone else, I thought it would happen in the finale, but in hindsight it makes sense that the writers would need one more episode to bring the season to a close. The characters lived and moved within the anxious terms of the 1960 elections and the Cuban Missile Crisis (Season 1 and 2 closers, respectively). Not so with JFK’s assassination, which suspended the nation in a total emotional freeze.

The clutch at my chest throughout this episode recalled September 11 so keenly that it is almost too obvious to point out. It captured the captivating hand of the news, even when nothing was really happening — my supervisor at the craft store that night took the TV out of the break room because no one would stay on the floor — and the pervasive sense that there was nothing to do, that every banal act was somehow perverse. When Betty stood up after watching Jack Ruby shoot Lee Harvey Oswald and shouted “What is going on?”, that heart-shaking ripple of chaos and bewilderment was familiar.

By the end of this episode, “Everything will be okay” is no longer enough for cosseted Betty’s obsolete marriage, Pete is wearing a tres-mod black turtleneck, and Don Draper — the man, and everything the man stands for —  is starting to lose his grip on the shadowy power he has held over everything and everyone since Roger Sterling saved him from certain anonymity selling fur coats or used cars or God knows what. It’s the day, quite literally, everything changed.

An oft-lobbed critique of Mad Men is the way it has encased the ’60s in amber for us to gaze upon as a relic, a piece of jewelry from an ancient world. But I love the way that Mad Men punctures time. My mom is about Sally Draper’s age; my aunt was a keypunch operator at Ford in the early ’60s; my dad was a Jewish teenager who worked in restaurants and listened to ’50s doo-wop music.

Their lives were unlike any lives that Mad Men shows us,  but its age, and its world, isn’t entirely dead. History is like a set of nesting dolls; the shock of the JFK assassination is still resonant inside of our own era, painted into patterns of cultural neurosis, echoed in the terror that it could happen again.

“Everything changed” is a post-9/11 leitmotif, too, and never have my feelings about what happened then, what I watched happen, been more gracefully and affectingly reflected to me before I saw this epsiode. Did anyone else cry? Feel horrified? Or as if a scar had been cut into afresh? Though I am a devoted reader of several regular Mad Men blogs and supplements, I haven’t read anything that entirely satisfies the deep emotional impact I felt after the credits rolled. Scott and I were so worked up we had to go to the bar for martinis and a long, rambling talk about family secrets and the sledge-hammer weight of the personal past.