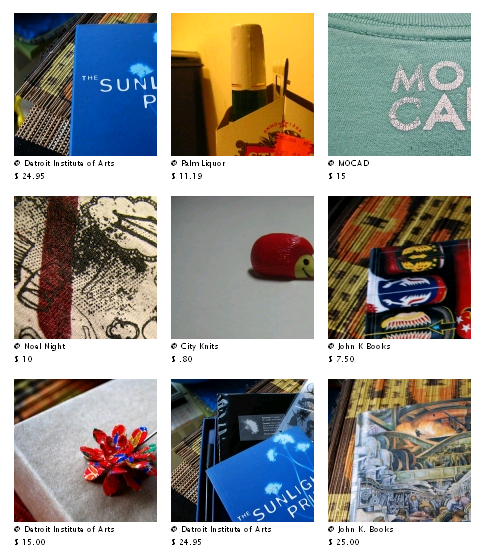 It’s simple, participatory, and pleasant to look at. Did you buy something in Detroit? Post a picture and submit it to Bought in Detroit dot com.

I know it seems banal, but how many times has someone from out of town called you to say, “HEY! I heard there are no grocery stores in Detroit!” OR: “Gee! Can’t you buy a house for like a dollar?”

The surprise with which people greet the fact that there are functioning local business that are wonderful and would be wonderful in any other city is tiresome, and spending your time and your dollars in the local economy is good for everyone.

So far, users have uploaded photos of books from John King, colorful food from Eastern Market and University Foods, a pizza, drinks at the Bronx, scarves, soap, pretty things from City Bird and City Knits and the Bureau of Urban Living. You can also follow Bought in Detroit on Twitter, where you will learn about things bought in Detroit that did not make it to the gallery, for instance, a blueberry muffin from Avalon Bakery that was purchased but eaten before the photo shoot.

It’s not revolutionary or grand in scope but it is a loveliness, and I am in favor of loveliness.

(Thanks to Perfect Laughter for the tip.)