There is nothing unusual about a deer, I know. They are so populous we need to issue licenses to kill them every year — for their own good. The drive from the southeast corner of Michigan to the western coast of the lake in Wisconsin is measured in deer corpses on the highway shoulder. Most people I know have shot a deer, hit a deer with their car or know someone who has, can dress a deer, eats deer, or once stumbled over a garbage can stuffed with a deer’s carcass whilst playing football in the street. 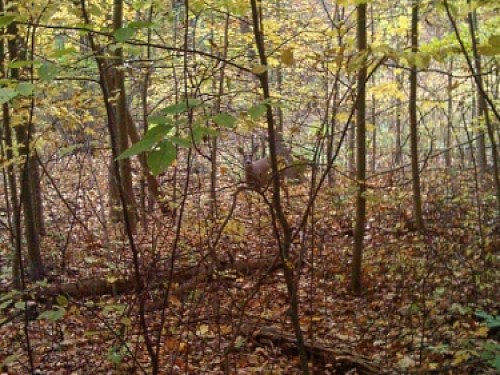 My parents found no joy in the outdoors; to them, “roughing it” meant finding a restaurant in a foreign city with a legible menu. Growing up, my biggest zoological excitements (outside the zoo) were garter snakes, exceptionally large spiders and the rare mole sighting — maybe skunks on dark summer nights, but mostly only their awful smell, and as I got older that only meant I’d have to scour the dogs. I guess a creature as large and majestic as a deer holds, to this day, a glimmer of city-kid mystery. It is rare that I don’t see a deer or four in Heritage Park — the bucks with a flash of white tail darting out of sight, the does with their long, still gaze under those big, ridiculous, vulnerable ears — but I can’t help but stand frozen and watch them for a while, until I start to think about those antlers, and what they could do to me, and scamper off.