Books lead you to strange places. After learning about the cauldron that boiled Mad Anthony Wayne’s exhumed bones a few weeks ago, I was drawn to learn more about the young Revolutionary War general and his role in the settling of the city of Detroit.

After searching for out-of-print paperbacks on Amazon for a while, I remembered that I live next door to an especially good public library, and I put on a sweater and marched myself over there. When I arrived, though, I learned that all of the library’s books on Mad Anthony are part of the library’s non-circulating Heritage Collection.

So I slipped into the Heritage Room, where I failed to find the biography I was looking for but managed to become distracted in no time by the modest but well-curated selection of books on the Detroit area, the state of Michigan and the Great Lakes region at large. 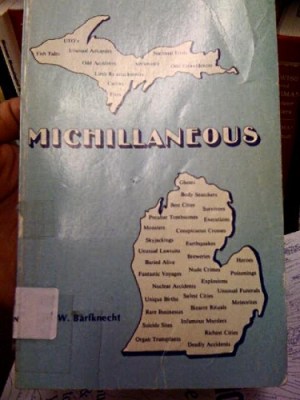 A corner of the shelves in The Heritage Room is given over to the big binders that organize the city’s archive of newspapers and vital records, where my first instinct was to search for family names – specifically, an entry for my aunt and uncle, who were married in Farmington in the early ’60s.  Not that I need to – we have their wedding album – but it’s an affirmative comfort to see things on the public register. My aunt and uncle are dead now, and they didn’t just belong to me and my family; they were part of the world.

After fruitless leafing through the marriage books, my eyes were drawn to a fat blue binder, with collected news items about Farmington indicated on the spines: People; Land; Churches; Underground Railroad.

According to the Farmington Library’s online history index, an underground railroad station in Farmington is “part reality, part speculation,” but Mrs. Lillian Drake Avery, writing for the Michigan Historical Society in 1915, writes vividly (if anecdotally) about the business of freeing Southern slaves at a time when many people who lived through it were still alive. 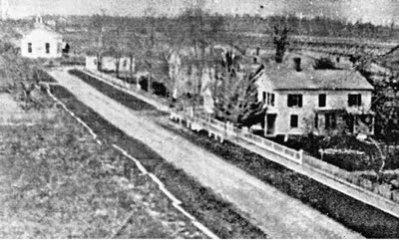 Mrs. Avery writes that Farmington was “the principal station in Oakland County … and the conductor was Nathan Power, or ‘Uncle Nathan,’ as he was universally called.” She continues:

I have met only one man, now living, who personally harbored the runaways, Mr. Palmer Sherman … went out to his barn one morning in June and was considerably astonished to find thirteen negroes camping on his freshly gathered hay … It seemed that Uncle Nathan had more people than he could take care of and had directed this party to Mr. Sherman’s barn.

Mrs. Avery recalls the book that the refugees carried with charts, maps and the names of the people who would harbor them. She also recalls, personally, seeing Sojourner Truth speak to Quaker groups in Farmington, bringing with her freed slaves, who showed their lacerated backs to the audience. But I was captivated by her description of Nathan Power, a friend of her husband’s, whom she recalls as

a tall, spare man with a merry twinkle in his eye, and his keen sense of humor, alert mind, good nature and conversational ability made him always a very welcome visitor. It was his custom to walk to the village on his birthday and call upon his numerous friends. One year I remember distinctly when he thus favored my husband Dr. Avery. Not finding him at home he remained to chat with me and I tried my best to entertain the old gentleman until the doctor’s return.

It was she, she writes, whom Mr. Power entertained, and the two discussed their mutual love of poetry until Dr. Avery arrived. 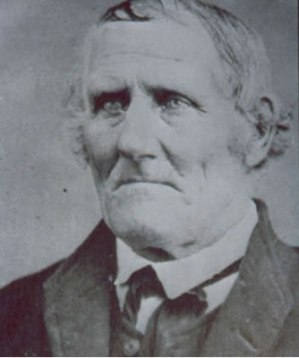 Nathan Power was the son of Arthur Power, the first settler of Farmington (then called Quakertown, ostensibly since it was full of Quakers – possibly the first in the state) and amazingly, the library has a painstakingly edited, indexed and manually typed-up (like on a typewriter, with handwritten corrections and notes) edition of Nathan Power’s diary, which he kept from the time he moved from New York to Michigan when he was 25 to his death in 1874 at the age of 72. The original diary still belongs to the Power family.

It’s a spare and intermittent account of Nathan Power’s every day life, his acquaintances, his work, and his business dealings, as well as an occasionally moody passage on aging and the death of loved ones. He kept track of deaths, marriages, birthdays, the carriages he purchased, the things he built, the journey his sons and friends took and wrote at least a little something on every birthday he celebrated:

This day I have completed my 36th year and with it has gone my Beloved Father who waisted away with the Consumption. Thought slow in its progress yet shure in its grasp on man and shows the mortality of our species. He was resigned to his lot and his death was calm and peaceful. In the A.M. of this day I went to David Smiths and got 500 of hay. Hiram Greaves and Gideon gathered in the saptubs in the P.M. Attended the funeral of Esek Brown which was solemn and the moreso when I contemplate on the manner in which the diseased had lived. Oh! That we may never defur to a dying bed the work of our entire lifetime

Closes my 38th year. I ploughed in the orchard in A.M. and in the P.M. ploughed wheat stuble in the lot first east of the old house.

This has been a year of universal peace and prosperity. The summer proved the warmest that has been since the great Eclipse in 1806.

I’m sure I learned about the Powers, the Quakers, the underground railroad and Farmington’s early settlement when I was in grade school, but I don’t remember any of it, probably because history didn’t carry much weight when I was a kid unless it involved ghosts, the Ancient Egyptians or something gruesome. The 19th century seemed drab to me, too recent to be really mind-blowing – not really related to my life, but not different enough from my life to matter.

When I was in high school, I had friends – twins – who lived across the street from the Quaker cemetery on Gill Street where Nathan Power is buried with his family and fellow community members.

Selinda Pain my first wife died of the Asiatic Cholera being 32 years old. My only daughter Phebe Minerva 5 years old died the same day at 11 o’clock and Selinda at 7 a.m. They were buried in our ground the same day at 6 o’clock. The first grave opened in our semitary.

Those were just bones and some spooky headstones for me in high school – a place to shoot super-artsy amateur films and do grave rubbings. Now that I’ve read the man’s words, it feels almost privileged to know that he’s buried just a few miles away.

I’ll pay a visit tomorrow. Meanwhile, I’m wondering if the Caleb Sprague from whom Nathan Power bought wheat on his birthday in 1838 is the same Caleb Sprague who’s buried in the Knapp Cemetary near my parent’s house in Novi, which I’ve written about before. 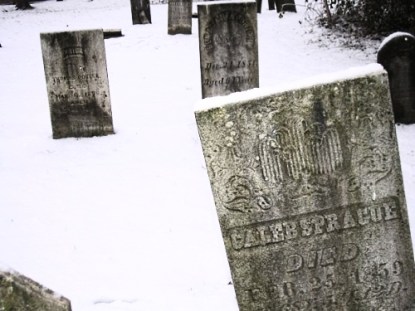 I imagine that you will find further broadcasts from the Farmington Public Library’s Heritage Room; next time I’ll be sure to include a cut for those not necessarily inclined to the flourishes and delights of local history nosing.

And now the heat is on: who will take up the obvious challenge of starting a blog called MICHELLANY?