Save the Deli media whirlwind, OR: My dad is in this book

Yes, I am a vegetarian. Yes, my dad is a meat magnate.

He’s Sy Ginsberg, President and co-owner of Detroit’s own United Meat & Deli, wholesale purveyors of gourmet deli meats including Sy Ginsberg’s Corned Beef and Gold Label Pastrami. He is a fixture of America’s Jewish deli scene and Detroit’s Jewish community. The smell of my childhood is garlic and peppercorns and brine; as kids, visiting the factory, my dad would take us into the refrigerator and sneak us pickles out of giant red barrels. We took calls at home for him from Willie Horton and Joan Nathan. Sometimes we’d see big semi trucks with his name on them and squeal.

I stopped eating the meat that paid for my life a long time ago, for an assortment of reasons, ethical and personal.  But I don’t begrudge my dad the work he does; I am beyond proud of him, as a deli folk hero, as a man of the city, as an entrepreneur, as a hard worker. He’s incredible, and I’ve always wanted to write a book about him, or the history of corned beef, or a memoir about my childhood (“Willie Horton Called Again!: The Amy Elliott Story”) or an imagined retelling of my dad’s childhood in the golden days of magnificent, industrious Detroit, son of a red-headed Russian Jewish mobster and a comely deli waitress from Kentucky. That is not at all like Middlesex.

I guess it’s not too late, but David Sax has in part beaten me to it with his book Save the Deli, a valentine to the traditional Jewish deli, a mythical place where no one orders a sandwich on white bread or with any condiments besides a little bit of spicy mustard. The book features a whole chapter about Detroit deli heavyweights, Sy Ginsberg included, and it comes out on Monday, October 19. 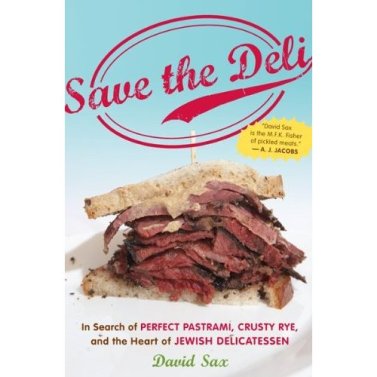 Mr. Sax’s publicist is pretty awesome and he has been all over the media world in recent weeks. Some of my favorite selections include a lovely ode to the deli in the New York Times (October 7) and a charming and funny Robert Siegel piece on All Things Considered (October 13).

You can try Sy Ginsberg’s Corned Beef at many local delis, including Mudgie’s in Corktown, any Bread Basket Deli, Hygrade Deli on Michigan Avenue and, of course, Zingerman’s in Ann Arbor, where David Sax and my dad will be on hand for a book signing in late November (date TBA).

Oh, and I found this, from VITAL Source’s 2009 excursion to Detroit for the credit-crash auto-industry-collapse edition of the North American International Auto Show. In a bitter twist of fate (or perhaps the consequence of our hubris), our magazine ended up folding before we could print the story. But we did get a nice video series out of it.

I wish I were eating a pickle right now.