On Sunday we went to Richard Barnes’s lecture on Animal Logic, his installation at the Cranbrook Institute of Science (part of the Artology series, a collaboration presenting “visual and experiential examples of the ways in which art and science frequently parallel or complement each other,” which will hold over creative-types while the Cranbrook Art Museum is closed for renovations).

The photographer gave a comprehensive introduction to his life as a photographer — working on assignment, documenting archeological excavations for universities and museums — and as an installation artist. His work, at its most basic, is about objects in space: buildings (like the Unabomber’s cabin, a series that is not on display in this exhibition but which Barnes discussed extensively in his lecture), tools, fetishized objects of trades and professions, the body as object and objects on display. There’s a sculptural element to this work — something formal. 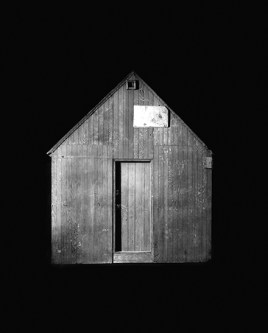 But there’s also something intensely interrogatory at the heart of his work; in the Unabomber series, Barnes explores the building on trial, the building as an object of interrogation. And in a series on the excavation of the Legion of Honor Museum in San Francisco — built over a Gold Rush-era cemetary — Barnes explores what goes inside of museums and what stays outside (or underneath) them and questions the authority of the museum in preserving, displaying and creating our past. 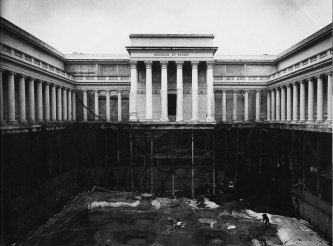 (I’m reminded of a recent conversation about the British Museum, which a friend described as hilarious, and how the artifacts, although they should probably be returned to the nations they were looted from, are in the British Musuem to stay, and unintentionally create a shadow museum — a permanent exhibition on the history of British colonialism. But that’s another blog.)

Animal Logic is about museums, too — specifically, natural history museums — and what goes on underneath them, in this case in a more figurative sense, as the artist explores museum objects (mostly taxidermy) in transition, or in storage. The museum is a theater, and Barnes allows us to go backstage with him to see the rigging. 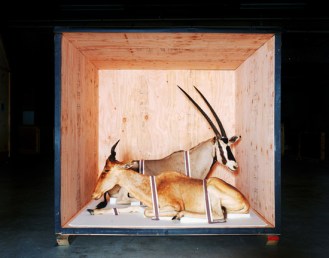 The exhibition is like a Victorian cabinet of curiosities: disarticulated skulls, bird nests made out of trash, beheaded mallards, tiny stuffed parakeets so bright they look like they’ve been painted, installed on their backs with their skinny legs in the air. (Further reading on Animal Logic should include the New York Times’ piece on “New Antiquarians” and the Morbid Anatomy blog and the artwork of Cassie Smith.)

It’s a critical survey of the way we see nature from inside an institution, but with the incorporation of “Murmur,” a 2007 multimedia installation about starling migration in Rome, the exhibition takes on a layer of graveyard meditation, too: the defiance of death through the eternity of taxidermy (hints of humanity’s romance with ancient Egypt, and Barnes worked there on a dig with Yale); the creepy liveliness of a mounted stag’s head; the second death of a stuffed specimen taken off display; with the starlings, aspirations of eternal return.

New photographs and specimens for the exhibition were taken behind-the-scenes from Cranbrook’s extensive ornithology collection, and it’s amazing to go upstairs after spending some time with Animal Logic and see the Science Institute dazzlingly refreshed. Richard Barnes makes art from artifact; upstairs in the science museum, the artifacts on display— dinosaur bones, stuffed peacocks, pinned butterflies—look curiously like art. 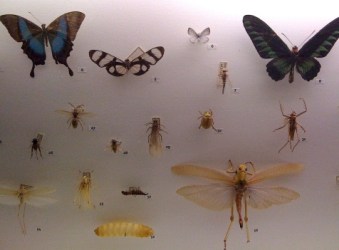 Barnes also has corresponding exhibitions at the University of Michigan Museum of Art (through December) and Uof M’s Institute of Humanities (through October 30). For another perspective on photography, the Detroit Institute of Arts hosts a comprehensive study of Richard Avedon’s fashion photography through January 17. If objects in space are more your style, Breeding Ground continues at the Museum of New Art through November 21.