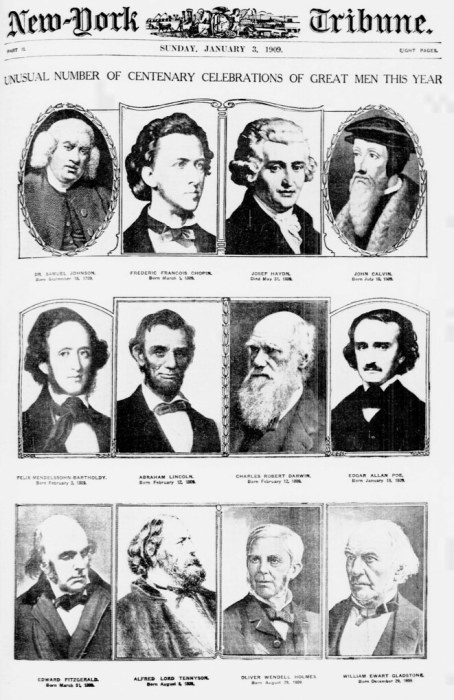 I can’t stop reading this headline, from the January 3, 1909 edition of the New York Tribune. It’s so wordy! Somehow erudite and trivial at the same time! And the selection of historical luminaries is curious. Why are these centenary celebrations all birthdays except for Josef Hadyn (d. 1809)? Moreover, if we’re counting death centenaries, too, where are Thomas Paine (d. 1809) and Merriweather Lewis (d. 1809), and why include British P.M. William Ewart Gladstone (b. 1809) instead?

Also: it is now 2009! Which means these centenary celebrations are now packing an extra century. Much was made this year, of course, of the shared 200th birthday of Abraham Lincoln and Charles Darwin, but Frederic Chopin and Felix Mendelssohn? Oliver Wendell Holmes? I had no idea! Happy birthday, fellas.

(Aside: I was impressed to learn at the National Portrait Gallery on Saturday how many 19th-century luminaries held a number of pursuits, professions and hobbies throughout their lives — Oliver Wendell Holmes was a doctor and medical reformer, an early stethoscope advocate, inventor of the word “anesthesia” and proponent of the germ theory of disease. Sanitary surgical instruments? Thank this guy! 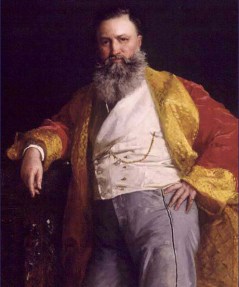 And are an unusual number of great men (and women) celebrating their first centenaries in 2009?

And Geronimo died. His skull is still MIA.